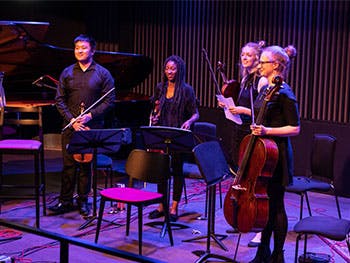 Royal Birmingham Conservatoire celebrated signing a prestigious distribution deal for their music by hosting an all-day festival of innovative performances.

A day of performance

Birmingham Record Company (BRC), initially set up in 2013 for the Conservatoire’s Composition department to release their music, have formed a distribution partnership with renowned label NMC Recordings. To celebrate, the Conservatoire hosted a special BRC Day on Friday 2 May to showcase the talents and outputs of the school’s musicians.

“The day went really well, with incredibly generous and supportive audiences for all the events,” says Andy Ingamells, Research Fellow and BRC’s label manager. Andy is also an established performer in his own right, and staged his own piece at the event which was structured around the Irish sport of hurling, made in collaboration with Seán Clancy, Senior Lecturer in Composition. “The seating in the Recital Hall was completely removed, with the audience being placed in the thick of the performance. We extracted musical sounds by running around the audience wearing space blankets, bouncing balls over exposed piano strings and layering up recordings of ourselves hitting the balls back and forth,” he says. The performance was recorded by BBC Radio 3 for future broadcast.

Other performances included a dedication to Moog synthesisers (performed in almost total darkness) and an informal gig at Eastside Jazz Club, compered by respected experimental composer and accordionist Howard Skempton.

With such experimental and innovative performers within the Conservatoire, Andy feels the partnership with NMC is perfect. “We want to challenge the received ideas of what contemporary music is, rather than preserve it in amber. It’s about breaking down boundaries,” he says. “The relationship with NMC has provided professional support to BRC in developing the quality of the younger label. Since the agreement was signed, BRC now has its own dedicated section of the NMC website.”

There are plans for further development. “The goal is for graduates and alumni to be on it, giving students something to work towards and aspire to,” Andy says. “The label is very Conservatoire-focused, but we want to involve other faculties, the recording studios, the people in Media Studies and more. We want to move it away from just being outputs for staff to being a hub for good music.”