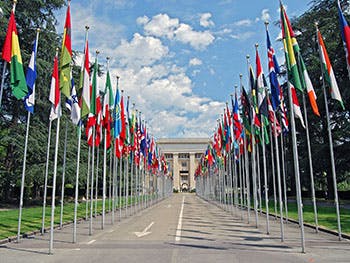 Birmingham City University’s Centre for Human Rights (CHR) has successfully contributed to the influential UN Universal Periodic Review (UPR), a process which seeks to ensure the protection and promotion of human rights across the world.

The UPR Project at BCU was created in 2018 by the CHR to bring together research being carried out on key human rights issues.

The project has helped to bridge the gap between academia and human rights practice.

Submitted to the UN in September 2019 in collaboration with the Elisabeth Haub School of Law at Pace University in New York, the UPR Project’s stakeholder report included several suggestions for the US to enhance its human rights policies.

Action against climate change and the death penalty

The UPR Project at BCU’s stakeholder submission was cited four times by the Office of the High Commissioner for Human Right’s summary report, demonstrating the quality of the recommendations made and the credibility of the School of Law.

Among these were a bid to reinstate USA’s involvement in the landmark Paris Agreement for climate action and supporting Amnesty International’s claims concerning miscarriages of justice that occur in the US death penalty.

‘The USA is a very popular country within the UPR process and it received around 160 stakeholder submissions in total. For our submission to be cited four times, particularly to affirm the views and recommendations of global non-governmental organisations such as Amnesty International, is a great achievement.’

Potential for impact on an international scale

The final stakeholder report, which includes the UPR Project’s recommendations, will now be reviewed by the US government to inform decision making at the highest level.

The report will also be read by the other UN member states in order to formulate the recommendations they will make to the USA during the review in the Human Rights Council in November 2020.

This places the School of Law firmly in the international human rights sphere and is one of many steps that have already been taken by members of the Centre for Human Rights to seek the protection and promotion of human rights globally.

View the CHR's full report or find out more about the UPR Project at BCU.