The truth behind the UK’s ruined churches 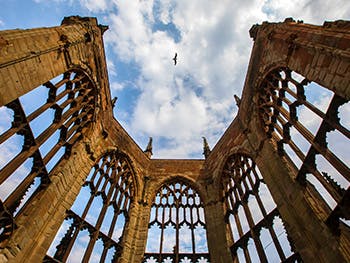 An article featured in the latest Change over Time Journal explores the existence and plight of church ruins and war memorials in the UK, as prolonged austerity and costly maintenance may lead to the decay and possible redevelopment of some of these historical sites.

Authored by Peter Larkham, Professor of Planning at Birmingham City University, the research investigates the utilisation of war-damaged churches across the country and their value to local communities.

In England alone, bombed churches have survived in several cities and many also survive elsewhere in Europe.

Professor Larkham explains that while some are effective memorials still in religious use and attract many visitors, others remain as costly ‘dead architecture’, which provide little evident benefit to their communities.

Professor Larkham has a long track record of research in urban form and conservation, exploring processes of decision-making.  His work explains how we get today's urban forms, and how we might make them more effective, liveable and usable, future cities. He said:

‘These churches are examples of problematic decision-making processes, created with varying pressures from local people, local authorities and church organisations at a time when church attendance was falling dramatically.’

The future of war-damaged churches

While there are circumstances of war-damaged churches serving little social and economic purpose as memorials, there are many pressures to maintain these buildings due to their cultural, historic and religious significance.

The research argues that despite the heritage value of these sites, more should be done to serve the community, now and in the future.

‘Monuments of the mid-twentieth century may become less relevant now, and decision makers need to understand wider patterns of changing values and attitudes, especially toward remembering and forgetting.’

While busy city ruined sites such as Coventry Cathedral have flourished as both a religious and entertainment venue, this solution may not be suitable for all churches and locations. Professor Larkham explains:

‘Now, in a time of prolonged austerity, those local authorities who once sought an easy war memorial are finding these large and damaged structures are expensive to maintain.  Expensive structures with few users might fall victim to future redevelopment."

Professor Larkham’s full article is available in volume 9.1 of the Change over Time Journal (subscription required).