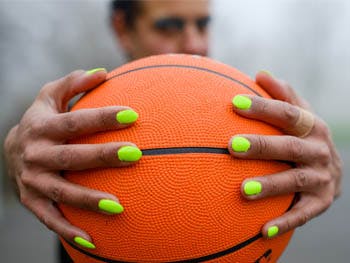 Academics at the Royal Birmingham Conservatoire are working with the Birmingham 2022 Festival to highlight the discrimination faced by LGBTQ+ athletes across several Commonwealth countries.

Three basketball players and an ensemble of singers and musicians will come together on the Smithfield practice courts to tell the story of John Amaechi, the first NBA player to come out as gay in the very straight world of the sport.

Homosexuality in sports and the Commonwealth

The performance is designed to challenge existing prejudices and shine a light on the repression of homosexuality in sport.

There are 35 Commonwealth countries where homosexuality is illegal, 13 of which punish homosexual acts with imprisonment or death penalty.

While there is an increasing support in the sports world for LGBTQ+ athletes, many sports people internationally still live in fear of expressing their sexuality, whether they live in a country where they are allowed to openly live their homosexual lifestyle or not.

In the performance, three basketball players, three percussionists and an electronic musician will create a fast-paced blend of music and choreography, mirroring the 3x3 basketball games that will take place on the practice court at the Smithfield Festival site.

The performance will be frequently interrupted by three vocalists singing text from the books “Man in the Middle” and “The Promises of Giants” by John Amaechi, intersecting the sport with the story of Amaechi’s journey coming out as an openly gay sportsperson.

“The work will not only highlight the technical virtuosity of performing sport and music but also create a space to reflect on the very serious and present issue of discrimination in sport.”

The performance will take place at the Smithfield practice court on 30 and 31 July 2022, and will be accessible online after the event.

For further information on the Birmingham 2022 Festival visit birmingham2022.com/festival