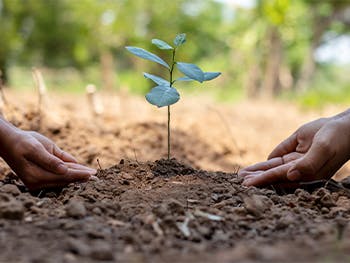 Researchers from Birmingham City University were recently invited to discuss their innovative collaborative research into bioenergy at a British Council roundtable event in preparation for the United Nations Climate Change Conference (COP26).

How universities can help combat the climate crisis

Associate Professors Taufiq Asyhari and Adel Aneiba, part of the Faculty of Computing, Engineering and the Built Environment (CEBE), spoke at one of the British Council’s Higher Education Roundtable series on Wednesday 27 October.

The roundtable explored the challenges and successes of the Climate Connection trilateral grant programme, which brought together researchers from the COP26 priority countries to focus on climate-related research.

The event, which focused on innovative approaches for collaborative research, saw panellists from the UK, Japan and ASEAN countries (Indonesia and Malaysia) take part.

Taufiq, who also chaired a panel discussion, and Adel were invited to speak in order to discuss their British Council-funded project, as well as being part of their commitment as one of the competitive research grant recipients of the British Council’s COP26 Trilateral Research Initiative.

Together, they lead a global research team in partnership with the University of Tokyo (Japan) and Gorontalo State University (Indonesia). The project investigates the bioenergy challenges Indonesia are facing in order to help reduce the country’s dependence on fossil fuels.

“The work will deploy cutting-edge computing and engineering technology across the Wallacea series of islands located between Asia and Australia, in order to record biodiversity and identify routes for ecological management,” Taufiq and Adel explain.

“By focusing on the Wallacea region, known for one of the world’s biodiversity hotspots, the project includes accurate digital mapping of the forest energy sources and appropriate utilisation scenarios.”

Exploring how universities can make a positive contribution

The roundtable series, which took place from October 11-27, saw universities from across the globe discuss the research partnerships they have cultivated and the progress they have made.

It was also a chance to examine some of the challenges institutions face in reducing their carbon emissions, as well as an opportunity to:

Taufiq says that their work and preliminary findings were well received, with a positive future lying ahead.

“The Head of Education from British Council Japan thought the presentation of our project was brilliant, and appreciated the panel session I chaired,” he says.

“The program director in Hong Kong, who is in charge of this Climate Connection Initiative for East Asia, was delighted about the turnout and felt they had gained some great insights.”

Taufiq is now looking to the future.

“The next step is now to expand upon our interim findings and explore future funding opportunities, so we can sustain the partnership with Japanese and Indonesian universities.”