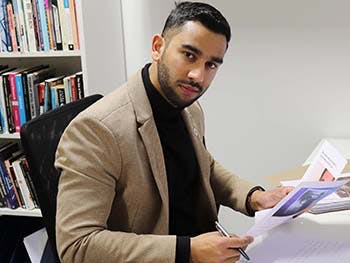 New research has examined the reasons why some men become serious violent offenders and murderers for organised crime groups in Birmingham’s criminal underworld.

Dr Mohammed Rahman, senior lecturer in Criminology at Birmingham City University, has produced a new book focusing on the impact of crime and serious violence, and the circumstances which create offenders.

Titled ‘Homicide and Organised Crime: Ethnographic Narratives of Serious Violence in the Criminal Underworld’ (Palgrave 2019), the study takes in personal stories, first-hand accounts and recreations of major incidents from the perspective of ‘getaway drivers’ who were involved in gangland executions.

Focusing on the criminal underworld in Birmingham, the book presents case studies of two hitmen explaining the circumstances, motivations and realities behind their offences. The first is the ‘Baby-Faced Assassin’ – a less experienced contract killer, the other is the ‘Journeyman Hitman’ – a person who has been involved in killing for cash over a long period of time.

Through in-depth biographical accounts, the book also tackles the circumstances facing the second city, which lead to some people taking part in criminal activity and serious incidents.  Dr Rahman speaks to a range of people; including police officers, informants, ex-offenders and ex-military officers to build up a comprehensive picture of the social circumstances behind serious violent crime.

He also shares insights into his own personal experiences of crime as well as his pioneering ‘dash-cam’ research method, where he has virtually reconstructed criminal events by recording the views that drivers would have had in getaway cars linked to street-level incidents in the West Midlands.

Dr Rahman said: “Both terrorism and organised crime are deemed to be national threats to security, however there are more fatalities in the UK because of organised crime, than all other national security threats combined.

A cash injection is much needed to tackle organised crime and for any national strategy to successfully work.

Having grown up in parts of Birmingham he describes as ‘the ends’, he details circumstances he directly experienced including being kidnapped by one of the book’s contributors over a decade ago.

He also discusses how Birmingham’s role in the industrial revolution and its historic gun quarter, has contributed to a legacy of violent crime and the use of firearms in the city.

Dr Rahman will officially launch the book at a special event taking place at Birmingham City University on Friday 29 November from 5.30pm. The launch will include a special talk on the topics, a Q and A with audience members and the chance to purchase the book at a discounted rate.

Tickets for the event are free and can be booked via Eventbrite by searching ‘homicide and organised crime.’