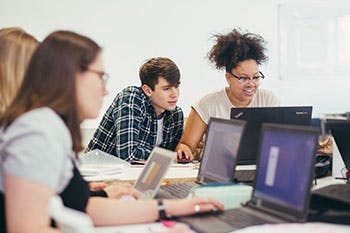 Despite dramatic funding cuts, research has shown the life-changing effects of further education (FE) on students and those around them, but funding strategies need to change if FE colleges are to survive and thrive.

Rob Smith, Reader in Education at Birmingham City University, has collaborated with Vicky Duckworth, Professor in Education at Edge Hill University, to conduct a series of interviews with teachers, students and their families over a three-year period. They followed those up with two national surveys: one for students and one for staff.  From the data, Rob and Vicky compiled a report detailing key recommendations for the future of further education.

The project, commissioned by the University College Union, was founded on the premise that FE colleges provide a lifeline to learning that has the power to transform students’ lives. This premise was ultimately confirmed by the research, reflected in the interviews with students and the recurrent themes of progression and attainment that were reported by the interviewees.

The findings show that the transformative nature of further education doesn’t stop at the student; the positive effects tend to influence those in the learner's social circle.

Families can be affected quite strongly by further education. There were cases of parents going back to education and their children were being influenced positively because of it, or even when younger people turned to college it was having a knock-on effect on the parents.

The research team were able to identify key factors which contribute to the best learning experience, as well as highlighting the contributions further education colleges make to reducing social inequality, poverty and mental health issues among learners.

The project highlighted further education’s potential to produce a range of social benefits that are often unrecognised by government. As well as economic benefits from increased skills and education, interviewees commented on the mental health and wellbeing support that further education colleges facilitate. Further education provides an educational lifeline for those who haven’t reached benchmarks in secondary school and reintroduces adult learners to education, allowing them to move on from insecure or poor quality employment, which may contribute to depression. Rob said:

One adult learner, who had suffered from depression, said that further education was essential to managing her mental health, as by completing her course she was able to broaden her horizons, increase her employability and strengthen her identity.

Spending on further education and skills fell by £3.3bn in real terms between 2010-11 and 2017-18, according to a report from the Institute of Fiscal Studies. Further education has suffered more than schools and universities in the face of austerity and competitive funding practices are having negative effects on the student experience. Further education colleges are granted funding depending on the attainment, retention and skill base of their students and leavers, which can lead to the prioritisation of favourable achievement data in place of a true learning experience. Driven by the need to chase more funds to remain sustainable, the research suggests colleges are at risk of prioritising performance data and student recruitment over delivering a genuine learning experience to students.

Looking to the future

Foreworded by the Shadow Education Secretary, Angela Rayner, the report outlines a number of recommendations for the future of further education in relation to policy and funding, as well as highlighting the key ingredients that lead to truly transformative teaching and learning. The report’s findings will be presented to Labour’s Lifelong Learning Commission (LLC) and stories of transformative teaching and learning from the project are viewable here.