A doctoral researcher’s work on enamel has turned into an exciting exhibition to be staged at various galleries across the West Midlands and Wales. 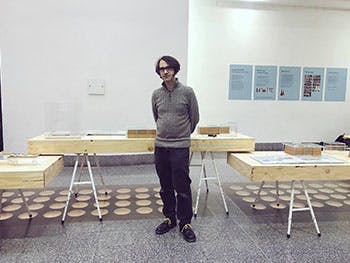 John Grayson, based in the University’s School of Jewellery, has conducted extensive research into the craftsmanship and heritage behind the material. The exhibition, Enamel / Substrate, displays both pieces from the original era and replications John has made using similar manufacturing methods to what would have been used at the time. “I’ve tried to use technology to unlock creative innovation that wasn’t there before,” John says. “For the contemporary craft community, there’s knowledge to be gained that could enable them to make complex objects more easily.”

The exhibition takes place at Vittoria Street Gallery from 26 November to 19 January, upon which John will give a special talk to commemorate the event. From that, Enamel / Substrate will then go to Ruthin Craft Gallery in Wales and finish at Wolverhampton Art Gallery. “The exhibition is about the journey of investigation within the research,” John says. “I have four pieces borrowed from Wolverhampton Art Gallery and three replicas which I produced, using the proposed methods used during the eighteenth century. Attendees can then judge for themselves to see if those processes were successful.”

John believes the research will have positive contributions for a number of industries, most specifically the museum sector. “There’s a lot of collections of these enamels in museums in the Midlands, Manchester and London, but curators’ understanding of the metalwork involved is sparse, so it provides them with a richer understanding of their collections,” he says. “It also will help people link objects to their places of production. We can examine how particular methods and metalworks used could signify a specific workshop or manufacturer.”

The project also shines a light on the talent and craftsmanship of the West Midlands, as well as completely changing popular perception surrounding enamel. “Prior to my research, it was genuinely believed most enamel during the era was produced in South London,” John explains. “My research has in fact shown that it was predominantly produced in the West Midlands. It demonstrates how the metalwork skills within the Midlands were fundamental in the growth of the trade.”