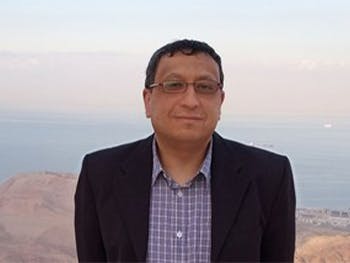 Professor of Data Analytics Mohamed Gaber has been named one of the world’s top scientists, according to data crunchers Stanford University and Elsevier.

Stanford University, which is located in the heart of Silicon Valley, has listed Professor Gaber among the top 2% of scientists within its global database ‘Updated science-wide author databases of standardized citation indicators’ – the first large-scale database that ranks all the most-cited scientists in every scientific field.

The database ranks the top 100,000 scientists globally based on their Scopus author profiles, and aims to clear up any confusion on citation metrics, which can be ‘misinterpreted as a measure of impact or excellence’.

According to Stanford University, the data addresses a ‘lack of standardisation and accuracy on many fronts’. It also aims to improve the accuracy of Google Scholar and Clarivate Analytics in ranking high performing scientists. Almost seven million scientists were included in the research.

Prior to BCU, Professor Gaber taught at the University of Portsmouth and Robert Gordon University. At BCU he founded the Data Analytics and Artificial Intelligence (DAAI) Research Group, directed research at the School of Computing and Digital Technology, and led the Centre for Computing and Data Science.

His research in Artificial Intelligence related areas was funded by the Australian Research Council and the EU Horizon 2020, among other sources. Professor Gaber is currently on secondment at Galala University in Egypt.

Professor Gaber said: "I am glad to be named in the top 2% of scientists globally, according to the recent study by Elsevier and Stanford University. Such a recognition pays off the many years of exciting research I have been contributing to. Thanks are due to all my co-authors, with whom I have published over the years. It is both rewarding and encouraging to be listed among the names of scientists contributing to world-class research with impact."

Pro Vice-Chancellor and Executive Dean of CEBE Professor Hanifa Shah said: “It’s fantastic to see Professor Gaber named as one of the most highly cited scientists in the world. It’s a testament to his vision, determination and hard work that he has reached this level. His contribution to building world-class excellence and expertise in Data Science here in CEBE has been a vital foundation for our progress in developing an exciting, globally competitive, research base in Artificial Intelligence and Machine Learning at BCU.”