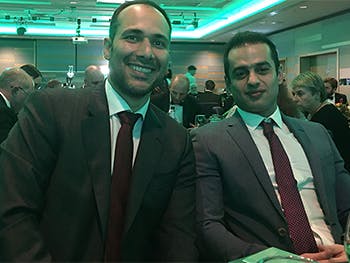 Research by Dr Ehsan Ahmadi, which explores the vibrational impact pedestrians have on structures, has been awarded a prestigious Research Award by the Institution of Structural Engineers.

In collaboration with Professor Colin Caprani (Monash University) and Professor Stana Zivanovic (University of Warwick), Dr Ehsan Ahmadi developed a computer model that can predict the impact human vibrations have on public structures.

This research could have potential impacts on the serviceability and safety considerations in the design of new structures, thus reducing future maintenance issues.

With higher demand for structures that are lighter and more aesthetically pleasing, measuring and countering the impact of footfall on structures is becoming increasingly important. Ehsan says:

‘With such aesthetic criteria, many new footbridges are experiencing excessive vibrations, which can lead to increased maintenance or closures.’

The temporary closures of both the Pont de Solferino bridge in Paris in 1999 and then the London Millennium Bridge in 2000, were caused by excessive pedestrian-induced vibrations during their inaugurations. Despite these closures, current design guidelines and codes do not consider the effects of human-induced vibrations.

Dr Ehsan’s model simulates the interaction between structures and pedestrians, and was tested against two real footbridges at the University of Warwick and Monash University.

The tests showed that the model can accurately predict the vibration response of footbridges, making it a valuable tool for any structural engineer in the vibration assessment and design of structures.

Ehsan feels that the recognition by the Institute for Structural Engineers demonstrates the scientific significance of the work:

‘It’s an acknowledgement of the hard work we went through to make a considerable impact in the field.’

The team plan to develop the model further by exploring different high traffic structures such as stadiums.

You can read the full research article here.