Richard Burn: Music-making for the deaf 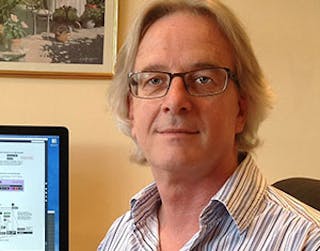 Having spent 35 years in the Royal Air Force, Richard decided to pursue his long-standing interest in music technology.

While studying for an MSc in the subject, he did some work on visual feedback – using light and colour to enhance musical performance.

He decided to study this in more depth for his PhD, but with a particular focus on the needs of deaf musicians, says Richard:

“The MSc project involved theatre lighting and computer displays, so that when a musician played the keyboard, it triggered effects which represented the sound, giving a more immersive experience for the player.

"It struck me as soon as I put that proposal together that it could be useful for deaf musicians as well.

“Deaf musicians generally play acoustic instruments – quite often percussion – and I suspect the reason is that you get a good deal of physical feedback from vibration generated by the instrument, and you get subtle visual clues as well.

“I will be conducting a range of interviews and surveys in order to understand what type of feedback would be useful to deaf musicians. The second stage will be developing systems that deliver those feedback loops and then the third phase will be testing the systems that I’ve developed to see whether they fit the project’s initial aims.

“This is a chance for me to look at a subject that I’m interested in in real depth, but from a slightly different angle. I’m certainly looking to broaden my knowledge of musical devices, but there’s also a lot to do with human-computer interaction in there as well, which is an area I’ve only scratched the surface of in the past.

"My research should also contribute to the body of knowledge in quite a specific area where there’s not been too much done yet.

“I see my PhD as the start of a second career – for the next three years it will be my full-time job, as well as retraining for my new career. I definitely want to stay in academia in some way after I complete my PhD, whether that’s lecturing or research or a mixture of both.”