The Research Whisperer is dedicated to the topic of doing research in academia. We talk about finding funding, research culture, and building academic track-records.This blog is managed by Jonathan O'Donnell and Tseen Khoo.

Go to the blog 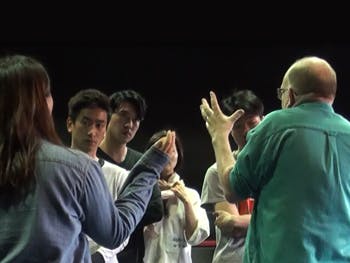 Peter said: "It was an exciting and fruitful 10 days, in a forward-thinking country which is keen to strengthen its links with the UK’s academic and artistic communities, and it seems likely to lead to some valuable collaborative projects and lasting partnerships."

More about the Seoul Project...

The principal point of contact was with the Korean National University of the Arts, which was set up by the Ministry of Culture in 1993, and directly funded by central government. It was set up in response to the realisation that Korea sent most of its budding artists abroad for their professional training, and is Asia’s foremost Conservatoire across a broad sweep of art forms. It boasts the best artists in the country as its alumni and as its staff.

Peter had meetings with Professor Choi Young Ai, and Professor Hwang Ha Yong, who run the course, and did workshops with graduate students on the three year MFA course as well as having meetings with former students. Already plans are underfoot for an exchange of students with BSA, starting next year with reciprocal visits, and building towards a specialist MA course between the two institutions at some point in the future.

Peter also carried out a five-day workshop with professional actors at the National Theatre Company of Korea, which is paving the way for a practice research project taking place this summer. He will be returning then, to direct a new production for teenagers, ‘Nobody’, which has been written by award-winning London based playwright Evan Placey [writer of ‘Girls Like That’] and leading Korean playwright Ko Sun Duck [‘The Bridge’]. Two of the BSA Applied Performance students will be accompanying Peter in the summer, to work alongside the National Theatre team, and to record and blog the project, which will then be toured back to the UK in 2017.

Theatre collaboration with Budapest conservator for theatre and film 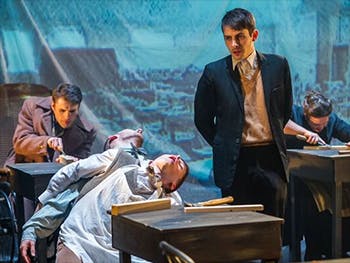 Birmingham School of Acting have teamed up with Kolectiv Theatre for a multimedia performance based on Bruno Schulz novel Street of Crocodiles at the University of Theatre and Film Arts in Budapest, Hungary in May.

This is the beginning of collaborative practice as research project between BSA and a leading Conservatoire in Central Europe. The performance was directed by Aleksnadar Dundjerovic, movement director was Clive Mendus ( Complicite) and original music was composed by Chloe Knibbs.

More about the play and watch a performance...

The play 'The Street of Crocodiles' is set in the Polish city of Drogobych is a street of memories and dreams, where recollections of Bruno Schulz's uncommon boyhood and the eerie side of his merchant family's life are evoked in a startling blend of the real and the fantastic. A feather falls out of a book marked for destruction, and takes Joseph back to his childhood memories of woodworking classes, family dinners, an attic aviary, and an upholstery shop full of swooping bolts of expensive cloth.

Mingling the sensuous accents of Schulz’s stories with the ominous approach of the fascist aggressors who cut the writer’s life short, this tale is a restless, evocative and endlessly inventive dance of memory and story, a narrative of wit and power.

Originally co-produced by Theatre de Complicite at the Royal National Theatre it opened at the Cottesloe in 1992 and toured all over the world.

Watch a video of a recent performance of the play

Join us on Tuesday 7 June for an intensive one-day discussion of the most critical political issue now facing the world and the future of culture within it.

This is the first in a series of annual international one-day conferences organized by Professor Jonathan Harris, Head of School of Arts within the Centre for Fine Arts Research (CFAR) on topics of urgent social interest locally, nationally and globally. 'Terrorism and Cultural Freedom' assembles a group of world-leading intellectuals, commentators and cultural figures to discuss the most pressing political and artistic concerns of the world today.

Though terrorism is associated currently with fundamentalism originating in the Middle East (and with the response of western nation-states to it) forms of violent action against states, countries, cultures, groups and individuals has a long history.

Keynote speakers WJT Mitchell, Tariq Ali and Anthony Downey will contribute incisive accounts of the stakes in this crisis, examining both ‘terror’ as an idea and its complex relations to a range of cultural and artistic practices, both historical and contemporary. In addition to contributions by these speakers, the conference will include shorter presentations concerned with cultural freedom in an age of global terrorism, related to music, art, fashion, media, the moving image, writing and theatre drawn from experts within Birmingham City University’s own arts, design and media research communities, and including historical and contemporary examples.

Conflict, Memory, Displacement project is funded by an AHRC Innovation Award and is responding to refugee crisis in the UK and Italy. It is a project that will explore how people make sense of international conflict and how this understanding shapes attitudes to those displaced by conflict.

The project will examine the representation of conflict and of the impact of conflict through media representations, official and popular discourses, and institutional and citizen initiatives. It will also look at the ways refugees remember and memorialise the situations they have left behind. How can us help us understand the refugee crisis, and more generally international conflicts?