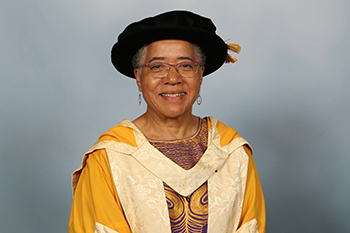 Collecting an Honorary Doctorate from Birmingham City University the acclaimed former nurse and health visitor, who dedicated years to improving care for those with sickle cell, told attendees how Birmingham’s health professionals had made a major difference to the life of one her cousins with the condition.

Speaking to a room of graduands from the University’s Faculty of Health, Education and Life Sciences, she said her Birmingham cousin had been diagnosed with the condition, and had seen healthcare workers contribute to improving his quality of life.

She said: “I’d like to take this opportunity to thank all of the healthcare professionals in Birmingham who provided my cousin with a much better quality of life, that I’m afraid sometimes individuals with the condition did not have during that era. So it’s a huge thank you to you.”

Professor Anionwu has had a celebrated career and after overcoming a challenging start in life she went on to become a nurse, health visitor and tutor after being inspired by a nun who cared for her eczema.

She set up the UK’s first ever sickle cell and thalassaemia nurse counselling service, and is celebrated for her pioneering work to further treatment and support for those living with the condition. In 2017 she was named Dame Commander of the British Empire in recognition of her work.

During her address, Professor Anionwu also thanked Birmingham City University’s Chancellor Sir Lenny Henry for being a champion for improving care for those with sickle cell having been a longstanding patron Sickle Cell Society.

“This year is the 40th anniversary of the Sickle Cell Society and Sir Lenny Henry provided his support before this condition was as well-known as it is today, before we had lots more celebrities supporting us and before he was ‘Sir’.”

During the ceremony held at Birmingham’s Symphony Hall, Professor Anionwu discussed how she had overcome challenges in her life, including a difficult childhood which saw her physically abused by her step-father and spend much of her formative years being cared for by nuns.

I’ve got lots of reasons to be proud of receiving this award but the one I want to mention is I was born in Birmingham.

“On the front cover of my memoirs is a photograph of me aged nine months sitting on my mother’s knee in front of the children’s home where I spent nine years.

Many people have asked ‘in view of the difficult circumstances that you’ve started out in life, how come you’ve achieved so much?’ And I’d say that the achievements have not just been professionally but in family life as well.

“So I’d like to share some ideas with you as you start out in your careers as to whatever challenges you have faced, are facing, will face. I think there are some reasons why many of us survive those challenges.

“Be aware of who supports you, of who’s looking out for you. And it may not necessarily be the people that you expect, so we mustn’t stereotype the type of people we think will support us or won’t support us.”

Professor Anionwu’s career also saw her work as a senior lecturer at the Institute of Child Health, University College London, before being appointed Dean of the School of Adult Nursing Studies and a Professor of Nursing at University of West London.

Professor Anionwu closed her speech by offering advice to graduates on making the most of their talents in their future careers. She said: “Always be confident about both your strengths and weaknesses.

“There’s often solutions to our problems, and to the differences that we may have which may pose barriers.”

Professor Aniowu’s memoirs ‘Mixed Blessings from a Cambridge Union’ were published in 2016.