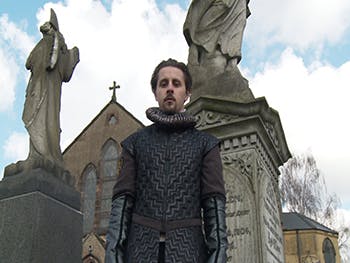 One of William Shakespeare's most famous tragedies – 'Hamlet' – is being translated in to the Black Country dialect, as part of a project that is aiming to record, celebrate and preserve the distinctive language of the area.

'Yamlet' – incorporating the Black Country word 'yam', meaning 'you are' – will see the titular character perform translated excerpts in locations around the town of Cradley Heath.

Yamlet will be portrayed by Birmingham School of Acting postgraduate student Stuart Ash. The actor, who comes from Stourbridge in the Black Country, will be filmed on location in period Elizabethan costume and his performances will be broadcast throughout April on Facebook, Twitter and, of course, ‘YowTube’ and ‘InstaYam’.

It's a fantastic project for me to be working on and something that's very close to my heart. I'm really proud of my Stourbridge roots, and playing Yamlet will be a great opportunity for me to tap in to that side of me as an actor.
Stuart Ash, MA Acting student, Birmingham City University

"I've picked up a few words and phrases from the script that I'd never heard before. It'll be really interesting to see what people who are from the Black Country – and people who aren't – will make of it."

The Black Country is an area of the West Midlands in England, north and west of Birmingham. In the Industrial Revolution, it became one of the most industrialised parts of Britain with coal mines, coking, iron foundries and steel mills producing a high level of air pollution. It is believed its name comes from the soot produced by these heavy industries that covered the area.

'Yamlet' has been devised by Philip Holyman and Gareth Nicholls, Co-Directors of Walsall-based theatre company Little Earthquake and Visiting Lecturers at Birmingham School of Acting, part of Birmingham City University.

The work has been inspired by the upcoming 400th anniversary of Shakespeare's death, as well as the Co-Directors' own experiences of making theatre more relevant to the local areas they host performances in.

"'Yamlet' is intended as a tongue-in-cheek response to some serious cultural problems; chiefly, the enshrinement of Shakespeare's work as a monument to high – or non-popular – culture, which excludes many people from experiencing it, and the question of how to preserve individual cultural heritage in drama training.

"I am increasingly interested in breaking down a deep-rooted Black Country suspicion that theatre is something which is made by and for people 'elsewhere', with no relevance or connection to local people or the local area. 'Yamlet', therefore, is designed to take a step towards making Shakespeare more accessible by relocating sections of his most famous play to the Black Country – in terms of language, space and performer – and also through non-theatre-based distribution platforms.

"With a ruff round his neck and a fake skull in his hand, Yamlet will celebrate Black Country cultural identity by capturing fragments of language which are in danger of being lost forever."

'Yamlet' is a commission as part of the ‘Where’s Our Spake Gone?’ project, supported by £77,600 from the Heritage Lottery Fund. Since 2014, a team of linguists, historians and artists has been working alongside local residents to explore ways to record and celebrate the distinctive dialect and language of the Black Country, which has preserved many archaic traits from Early Modern English and Middle English.

Their efforts have focused in particular on four towns in the southern half of the region — Cradley Heath, Gornal, Oldbury and Tipton — each of which plays host to a public event featuring performances and exhibitions.

The project will generate an archive of oral history interviews, as well as photographic essays and short films, workshops, a commemorative book with accompanying DVD and several new artist commissions, including 'Yamlet'.

There'll be a sneak peek at what Yamlet has been up to at the free ‘Where’s Our Spake Gone?’ launch event in Cradley Heath on Wednesday 6 April. Yamlet's page will launch on the Little Earthquake website on the same day, where all of the images and films from Stuart's performances will be on display.