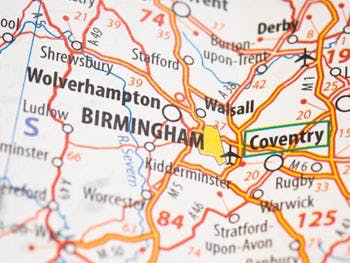 A Government review has backed plans for a new urban National Park in the West Midlands.

The Landscapes Review, which was commissioned by central Government last year, has supported the ambitious plans.

Originally conceived by Birmingham City University Professor and Landscape Architect Kathryn Moore, the proposal for a West Midlands National Park has since received substantial backing from the Mayor of the West Midlands Andy Street and support from a host of institutions across the world.

The final report from the Department for Environment, Food and Rural Affairs’ Landscapes Review was published this month, with the publication noting that reviewers were ‘impressed’ by the proposals for the West Midlands and that they ‘hope it happens’ and want ‘to see them thrive’.

The concept would create a National Park in the region spanning more than seven cities, creating hundreds of miles of green space, conservation areas and new cycle routes.

It would re-imagine what the West Midlands could become by taking a new look at the way its landscape is viewed.

Prof Moore said: “It is fantastic to see DEFRA’s report demonstrate such support for the creation of a West Midlands National Park and the major benefits that will bring to our region.

“The concept of a competition to create the greenest city in the country is also extremely welcome, but should not be limited to one city, as our region’s landscape from Warwickshire to the Black Country makes it the perfect place to implement this.

“The West Midlands should lead the way by creating this new kind of urban national park, taking its place as the greenest metropolitan area in the country.”

Mayor Andy Street and Prof Moore had pitched the National Park idea to the Review’s architect, Julian Glover, back in 2018 and have since been working hard behind the scenes to turn their vision into a reality.

Mr Street said: “When we used to talk about a National Park in the West Midlands people laughed us out of the room. But I knew we were onto something and now it is official – the Government’s Landscapes Review has endorsed our plan and wants to see it happen.

This is an opportunity to transform the West Midlands into the greenest, cleanest, most beautiful region in the country, and I will do what I can to make that happen.
Mayor of the West Midlands, Andy Street

Referencing the West Midlands National Park, the Landscapes Review report said: “In the West Midlands, with the support of the Mayor of the West Midlands, proposals are being developed to link the urban area with parts of its surrounding green belt, and to think of landscape, urban and rural, in new ways. It is exciting and we hope it happens.

“We have also been impressed by work being done to promote the idea of a new West Midlands National Park, and to make London a National Park City. These are not asking for new laws, or powers, but exist as a way of getting people to act and think differently. We applaud them.”

The Review also suggested the launch of a national competition for at least one city or large town to begin surrounding themselves with woodlands and wetlands alongside new developments, with the aim of making it England’s greenest city.

Professor Julian Beer, Deputy Vice-Chancellor at Birmingham City University, said: “The fact that this Review has given its backing to the West Midlands National Park is fantastic news for residents and businesses right across our region.

“The benefits of creating this National Park would provide a real boost for our economy and underpin the aims of the West Midlands’ Industrial Strategy, and the expansion of a green economy which will leave a lasting legacy here.

“This is an important step in transforming not just how our region is viewed, but also the future prosperity of every worker, student and resident in the area.”