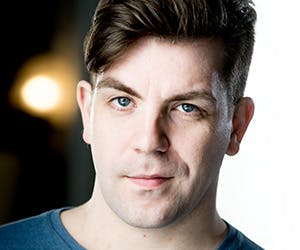 A postgraduate student at Birmingham City University has been awarded for his research on the specific challenges facing actors hoping to make it big in the video game industry.

Matthew Davidson’s MA dissertation has won the 2016 CAF-BCU Prize, awarded to the best dissertation on the creative industries submitted by a postgraduate student at Birmingham City University.

One of the first academic explorations into the notion of acting specifically for video games, Matthew highlights the importance of an actor’s preparation for the specific nature of the work and the ability to match personal skillsets, as roles differ greatly – from providing a voiceover to full-scale motion-capture performances.

He emphasises the need for an actor to maintain proper care and development of their vocal and physical abilities, as motion-capture can take several months and voice recording contracts can be several years long.

“Far from being a simple extension of radio work, or a stilted attempt at TV, video game acting is a hugely-varied and richly-rewarding career option for actors who are able to balance their physicality and their voice.

With multiple options available to an actor performing in a many-branching narrative, it can provide a huge amount of depth and variety, both in the characters available and in the choices that are made when performing that role.

Matthew’s work also considers the rise in popularity of virtual reality and points out that as players immerse themselves into games more than ever, actor’s reactions will need to be clear, realistic and changeable – similar to immersive theatre.

The 2016 CAF-BCU Prize will be presented to Matthew on Wednesday 13 July at Birmingham City University as part of a wider event exploring the relationship between the creative economy and universities in the Midlands.

Participants will be considering the expectations businesses, creative, educators and students have of each other for innovation, work and reward in exchanges between them and their collaborations. The symposium will discuss this in light of current issues and challenges facing the economy, society and culture of the Midlands.

The event has been organised by the Birmingham Centre For Media and Cultural Research (BCMCR) and is being supported by Creative Advantage Fund – both institutions being behind Matthew’s award.

“We are delighted to be presenting Matthew with an award at our upcoming symposium for a piece of work that has a clear value for actors who wish to work in the lucrative and fast-growing video games industry.

His dissertation impressed the judges, not only for its strong academic rigour, but also for the applied insights he offers actors, such as the need to be flexible, develop strong relationships with the animators and how to show realistic emotions, despite the digital processes overlaying a performance.

“Matthew will also be one of the panel discussants on the evening and will offer insights on being an acting student who is forging a career in the theatre sector.”

The judges were so impressed with the calibre of entries this year, that Birmingham City University MA Creative Industries and Cultural Policy student Andrew Dyce will also receive a highly commended award for his dissertation.

Following the presentation, both research projects will be made available as a BCMCR publication in hard copy and to download from the Centre’s website.

Book free tickets for Full STEAM Ahead? The Creative Economy and Higher Education.