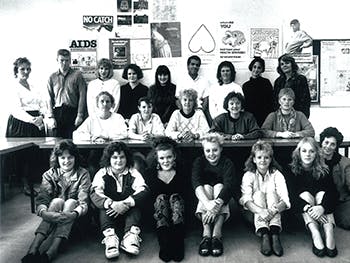 Graduates from a landmark nursing course have reunited after more than three decades to share their stories from across the globe and mark the NHS’s birthday.

Graduates from a landmark nursing course have reunited after more than three decades to share their stories from across the globe and mark the NHS’s birthday.

Former students from Birmingham City University’s first intake of nursing students gathered recently for an online reunion and celebration – 32 years after enrolling on the course, which was one of the first to offer training in a three rather than four year timeframe.

Members of the ‘Class of ’89’ got together for a virtual catch-up ahead of the NHS’s 73rd birthday today (Monday 5 July) and after one of the most challenging years the country’s health’s service – and those who work in it – have ever experienced.

The reunion took place on Wednesday 16 June and was organised by the University’s Alumni team, which helps former students keep in touch.

The get-together saw eight of the 21 students who joined the course in 1989 catch up about their lives and careers since graduating, and swap stories about how the pandemic had impacted their professional and personal lives.

The group who travelled from across the country to take up their places at Birmingham City University – then known as Birmingham Polytechnic – have continued to work in healthcare but have taken different paths since qualifying.

Some have specialised in particular disciplines like childcare and mental health, others have worked as far afield as New Jersey and the Australian outback, and one of the graduates is now working as a lecturer, teaching a new generation of nurses.

Elizabeth Bowring-Lossock from Hereford was among the new trailblazing students on the course, which unlike other nursing degrees on offer across the country at the time, took three rather than four years to complete.

Elizabeth’s mother was a nurse, which inspired her to follow in her footsteps and she is now working as a Lecturer in Mental Health Nursing at Cardiff University. But she remembers feeling trepidation at being one of the first to undertake a new kind of nursing training. Elizabeth said:

Growing up, my mum was a nurse, and she bumped into a friend who was a nursing tutor and she mentioned that there was this new course and suggested applying for it. I went for the interview and got in. Though three year courses are commonplace now, at that time it was really something that there was going to be a four-year degree in three years!

Elizabeth’s former classmate Alison Doyle also recalled that, as part of the new breed of nursing students, they had to overcome some old school attitudes among seasoned professionals at the time.

Alison, who is originally from Birmingham and now lives in Warwickshire, recounted the difficulties they faced in those early days. Alison, who works for a pharmaceutical company following stints in the NHS and the charity sector, said:

We weren’t welcomed by the nursing community at all back then. At that point, there was a lot of talk in the press about ‘super nurses’ and many didn’t like us as they couldn’t understand why we would go down the academic route. They thought we wouldn’t earn our stripes and just want management positions.

Other student nurses already in training would think that we would just take their jobs. So it was a challenging time to be one of the new type of student nurse!

Birmingham City University is now also the largest trainer of undergraduate nurses in the UK, offering degree courses in different specialism and nursing apprenticeships, which it has developed with local employers.