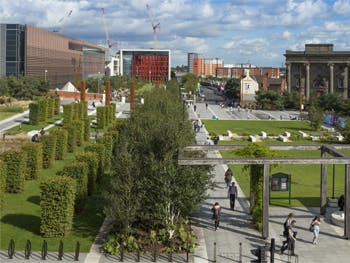 Birmingham City University has announced it will use either the clearing applicant teacher-predicted grades or  'awarded grades', whichever is highest to get their place at the university.

BCU will also honour places for existing applicants based on the higher of their two sets of results.

The University has committed to a safety net for applicants who wish to use valid predicted grades rather than 'awarded grades' following the disruption caused by the Covid-19 pandemic.

The news follows an announcement from the Department for Education of a ‘triple lock’ on grades for GCSE and A-Level students which incorporates mock results, awarded grades and appeals to take exams in the autumn.

Professor Clare Mackie, Deputy Vice-Chancellor at Birmingham City University, said: “The Government’s announcement is a very welcome one which recognises that using a calculated ‘awarded grade’ system can be unfair to some students and can be particularly hard on those from disadvantaged backgrounds.

“However, the proposed triple lock solution is just too slow a process and adds further complexity at this critical time. It will add more stress due to the time taken to complete the appeals and regrading process.

We hope that using teacher predicted grades at BCU will  help reduce some of the anxiety during this period which has only been increased by the current climate, and offers students some immediate stability about their futures.
Professor Clare Mackie

A report published by Birmingham City University and the Charlie Waller Memorial Trust before the coronavirus outbreak, showed that 82 per cent of students felt stressed awaiting their results, with nearly three out of four saying they were ‘nervous’ (71 per cent).

The research also showed that parents ranked awaiting their child’s results alongside other stressful life events such as moving house or separating from a partner.

Prof Mackie said: “The report we published last year showed us just how stressed and confused both students and their parents can be in the run up to Results Day, even before the added complexity caused by the COVID-19 pandemic.

A-Level results will be formally announced tomorrow (Thursday 13 August), with experts predicting it will be the busiest day on record for Clearing.

The University had already examined the feelings and students and parents towards A-Level Results Day and Clearing in a special study aimed at providing increased support for anxious and confused students.

The 2019 study conducted by ComRes interviewed 1,000 university students and 500 parents to uncover their feelings towards exams, results day, selecting a university and the mental health support available to them.

It also showed that 74 per cent of students thought their future depended on their exam results, that 92 per cent of female students used negative words to describe their exam experience. One in ten students had no external support during their exams.