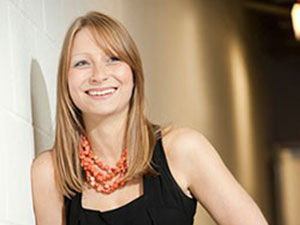 A Birmingham Conservatoire graduate described as “one of the outstanding composing talents of her generation” by the Evening Standard has been named as one of Birmingham City University’s Alumni of the Year.

Charlotte Bray, who graduated from Birmingham Conservatoire with first-class honours in 2006, has had pieces commissioned and performed across the globe, including At the Speed of Stillness, a BBC proms commission premiered at the Royal Albert Hall in 2012.

Charlotte, from High Wycombe in Buckinghamshire, has had works commissioned by some of the most established performers and ensembles including London Symphony Orchestra, Opera North and CBSO.

Upon graduating from Birmingham Conservatoire, part of Birmingham City University, Charlotte went on to complete a Master’s course at the Royal College of Music and was appointed as Birmingham Contemporary Music Group’s composer-in-residence for the 2009/2010 season. Charlotte also won the Royal Philharmonic Society’s composition prize in 2010.

Charlotte, who was made an Honorary Member of Birmingham Conservatoire in 2011, has been named as one of Birmingham City University’s Alumni of the Year in the ‘Excellence in Sport or the Arts’ category.

Charlotte said: “I am thrilled to be named as one of the Alumni of the Year. It is a great honour to be acknowledged by the University where I started composing."