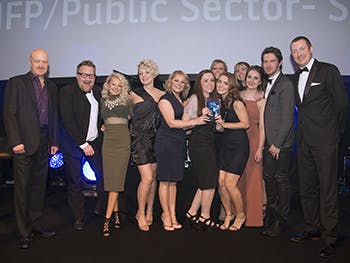 Birmingham City University’s pioneering step to become the first institution to offer Clearing places via social media has been Highly Commended at a prestigious national awards.

The University was named runner-up in the Digital – Social Media category at the Chartered Institute of Marketing’s, Marketing Excellence Awards, after making the ground-breaking move in August last year.

The awards were unveiled during a glitzy ceremony at the Grosvenor House Hotel in London’s Park Lane, in front of hundreds of nominees and industry professionals.

The Clearing process allows students to apply for University places after they receive their A-level results and the clamour for spaces can lead to busy phone lines for anxious applicants.

The decision to make offers on Twitter and Facebook was made after University staff noted an increase in the number of 16-24 year-olds choosing to interact via social media rather than through traditional communication forms like the telephone.

During the Clearing process the University received 151 social media enquiries from potential applicants, and more than 1,000 interactions.

A total of 61 students were offered places online with 56 going on to join the University in September 2015.

Professor Bashir Makhoul, Pro-Vice Chancellor at Birmingham City University, said: “We are delighted to have been Highly Commended for this award and it is even more pleasing to know that this had such a positive impact on so many students’ lives.

“Clearing can be a difficult time for many young people and the rush for places means phone lines become busy which only adds to the anxiety of the day.

We had seen an increase in the number of enquiries we were getting through social media, so it seemed like the perfect time to move with the times and make offers in this way and help ease the frustration students might feel.
Professor Bashir Makhoul

The University was shortlisted alongside household names Direct Line, O2 and The Economist.

During Clearing the University can receive up to 5,000 phone calls each day with the introduction of social media offers easing hotline congestion.