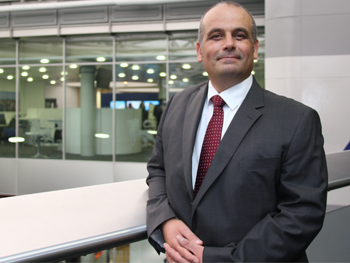 A Birmingham expert in plant and machinery management has picked up a trio of awards recognising his ‘outstanding contribution’ to science.

Emerald Publishing is one of the world’s premier publishers of scientific and educational resources with a portfolio of over 300 journals, more than 2,500 books and over 1,500 teaching cases.

Each year its Literati Awards are given to scholars from around the globe whose work has made an ‘outstanding contribution’ to science their work – pitting some of the world’s very best scholars against each other.

But Professor Edwards of Lower Gornal has gone on to win a rare hat trick of gongs at this year’s Literati Awards.

Professor Edwards said: “I am absolutely flabbergasted to win three awards in one year; it is a great privilege and honour to win these accolades for Birmingham City University, whilst these awards reflect the exceptional quality of research being conducted here I cannot accept all of the glory."

I work within an international team of academics that I have progressively built over a 25-year career and their contributions to this success must also be acknowledged.
Professor David Edwards

One of the award winning papers published focussing on Brexit was first authored by one of Birmingham City University’s undergraduate students Marwan Mohamed as part of his final year Honours Research Project.

The paper, published in the International Journal of Building Pathology and Adaptation, has been a major success securing over 2,500 downloads since being published and remains one of the most read publications for that journal.

Professor Edwards said: “It is so rare for an undergraduate at any University to publish their work in a peer reviewed scientific journal, let alone go onto win an Emerald Literati Award.

“Such work demonstrates the quality of teaching by Built Environment staff here at Birmingham City University such as Erika Pärn who supported Marwan with this work. It also shows the standard of students who wish to study here. This is the fifth undergraduate to publish their work but the first to win a major internationally recognised award – well done Marwan.”

Marwan said: “It was a real pleasure and privilege to study at BCU and be mentored and supervised by David and Erika during my dissertation studies – I could not have achieved this fabulous award without their help and guidance."

“I have since gone on to secure a good job in industry working for PM Group in Birmingham (a multi-disciplinary service company serving the construction industry) and I have used my research skills and writing to great advantage. I will always be grateful for the staff and Programme Leaders within the Built Environment who made my education there such as memorable experience.”