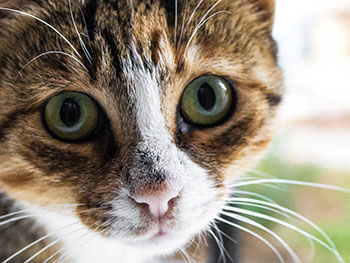 This week we celebrated International Cat Day. Many of us shared photos of our beloved pets on social media and celebrated our love of all things feline.  However, accompanying the positive and the fluffy was the dark and the sinister. A Guardian article reminded us that the hunt for the so called ‘Croydon Cat Killer’ – who would later became known as the ‘UK Cat Killer’ - has entered its third year.

Back in the autumn of 2015, an organisation called South Norwood Animal Rescue and Liberation (or SNARL) began investigating what appeared to be a series of cat deaths in which body parts of cats were found in people’s gardens and on their doorsteps. In December of that year, SNARL joined forces with the RSPCA and the Metropolitan Police as part of Operation Takahe to track down the perpetrator. As time went on, similar cat killings were reported in Surrey and as far north as Northampton and Manchester. SNARL believe that the perpetrator could be responsible for as many as 500 deaths.

Initially, there was concern about the perpetrator’s potential to escalate from hurting animals to hurting people – the so-called “species jump”. Even the National Crime Agency expressed fear about the dark sexual fantasies fuelling the perpetrator’s drive to attack and voiced their worries about the safety of vulnerable girls and women.

Recently, however, things seem to have fizzled out in terms of the official police investigation. Comment offered to the press has now been much more measured and cautious in tone about “reviewing” the information gathered. There’s no more talk of sexual predators.

What could be behind this?

Perhaps an alternative explanation has emerged? Some experts have argued that there is no cat killer at all and that the feline ‘victims’ are actually cats killed on the roads and subsequently scavenged by foxes.

Despite these competing explanations, behind the case lies an important social and cultural phenomenon - the obsession with serial offenders. The desire to believe that there is a serial offender says much about contemporary society. We see a similar phenomenon with serial homicide. The myth, for example, of the Manchester canal ‘Pusher’ – a shadowy and sinister figure who lurks around the city centre towpaths and pushes victims into the water - has become an urban legend.

Why do we want to believe that individuals are behind the deaths of beloved pets and men out and about in the night time economy?  Why?  Well, it is a convenient distraction that avoids having to confront the alternative and much more unpleasant reality.

In the case of the ‘UK Cat Killer’ - whilst a serial cat killer is a scary prospect, it’s still easier and less uncomfortable for us to accept that there is one, aberrant, evil cat killer than to acknowledge that there are many, many people in society who frequently neglect, harm and kill animals. We like to think that we are all a nation of animal lovers and that no one – certainly not any of our colleagues, neighbours, relatives or friends – would ever purposely harm an animal.

We want to believe in the Manchester ‘Pusher’ because it means we don’t have to think too hard about why the lives of young men engaging in the night time economy seem to be less valuable than other social groups. When our male friends decide to go off on their own after a night out, we think ‘He’ll be alright’ – but we insist on walking our female friends to the taxi rank, or seeing them to their doors. We fail to acknowledge how vulnerable young men are to fatal accidents, especially around water on a night out.

We construct the ‘monster’ because in so doing, we are able to engage in a practice called ‘fetishistic disavowal’:

Here we could think of the words of Zizek, who says: 'I know but I don't want to know that I know, so I don't know'. I know it, but I refuse to fully assume the consequences of this knowledge, so that I can continue acting as if I don't know it’ (Žižek, 2009, pp 45-46).

So, we play armchair detective and swap our theories as to ‘whodunit’, all the time consuming the suffering of others in a wound culture - a pathological public sphere in which we are drawn to the spectacle of the torn and open body of the victim (animal or human) and the torn and open mind of the evildoer (Seltzer, 2007). One of the few things that seems to foster a sense of collectivism these days appears to be the trauma of others and our collective belief in the abnormality of the constructed monster that causes the harm.

We need to challenge our belief in the monster.

We must confront the fact that every day, people devalue others. Every day, people harm others. And more often than not, these people do not look like the monsters of our imagination but are all too often the very stuff of normality.