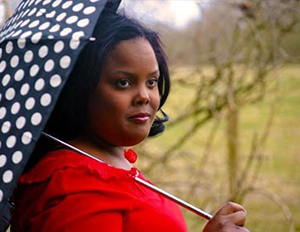 Fulfilling her desire to study abroad, Danielle Pinnock chose to study her Masters degree in Acting at the Birmingham School of Acting. Since graduating in 2012, Danielle is now a successful professional actor, playwright, educator and creator of the One-Woman Show Body/Courage.

Originally from the USA, Danielle completed her undergraduate studies at Temple University in Philadelphia. For her Masters degree, Danielle chose to study Acting at Birmingham City University as she has always wanted to study abroad and believed that she would get the best Shakespeare training overseas. As a prospective student, Danielle did plenty of research about the University and the professors to find out more information. “I was thoroughly impressed by their theatre backgrounds and course offerings. I also loved that the school wasn’t that far from the Royal Shakespeare Company,” she said.

Despite being far away from home, Danielle loved that Birmingham is a cultural hub for many ethnicities, religions and classes, which reminded her of Philadelphia. She believes that the city of Birmingham has a lot to offer with plenty to see and do. “It was so helpful to have the Bullring Shopping Centre within walking distance,” she said. “Birmingham has a lovely arts scene so it was it was always nice to catch a show at the REP (Birmingham Repertory Theatre) or a student production at the Old Joint Stock Theatre.”

During her course, Danielle enjoyed that she was given the opportunity to create her own work.

At the end of the MA, we were expected to create a solo piece for our dissertation. The one woman show I developed at Birmingham School of Acting is currently receiving its World Premiere in Chicago at Rivendell Theatre Ensemble. The staff at Birmingham School of Acting has always been very helpful and supportive and even though I graduated from Birmingham City University four years ago, the professors still check up on me and support my projects.
Danielle Pinnock

Since graduating, she has never been without acting work. She now works as a professional actor, playwright, educator and creator of the one-woman Show Body/Courage, which explores body acceptance. It was created from over 300 interviews conducted worldwide, and features a constellation of characters grappling with diverse body issues including weight, illness, disability, skin colour, aging, and gender transition.

Danielle believes that studying her Masters degree has helped her immensely with her career. “Studying at Birmingham City University gave me the tools I needed to build a professional career as an actor,” she said. “For those thinking of attending Birmingham School of Acting should be prepared to work hard and thrive but also to be prepared to have their lives changed for the better!”