Students to work with world-class cricketers at Edgbaston 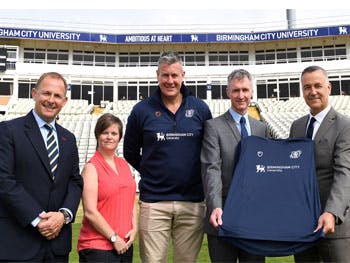 Students from the Department of Sport and Exercise at Birmingham City University will work with cricketers from Warwickshire County Cricket Club and receive teaching from Sport Director Ashley Giles and Conditioning Coach Chris Armstrong as part of a new Official Partnership.

The three-year partnership deal also includes sponsorship of training kit and advertising space for the University at the iconic Edgbaston venue. This new deal builds on a partnership that has been in place since 2014.

“Two Birmingham City University students will join our teams for each domestic cricket season as part of the programme, whilst up to 40 students will support projects with the professional squad and academy and pathway cricketers each year.”

In addition to the new elements of the partnership, the activation includes an extended level of branding within the bowl of Edgbaston Stadium, sponsorship of the new training kit worn by Birmingham Bears players ahead of NatWest T20 Blast games and use of Edgbaston’s conference and meeting space.

“Linking up with Warwickshire CCC and the Birmingham Bears will give our Sports students a unique opportunity to develop their skills with professional athletes. This practical experience will provide a solid foundation for a career in elite sport.

Our sponsorship deal with Edgbaston will make sports fans across the country aware of the fantastic courses on offer at Birmingham City University.
Professor John Deane

Birmingham City University will be part of Edgbaston Stadium’s biggest programme of major match cricket during the three-year partnership.

The legendary Birmingham venue will host an Investec Test match each year as part of the 28-day programme, which includes England’s first Day/Night Test against West Indies this summer, a Test against India in 2018 and the return of Australia for the Ashes in 2019.

Gareth Roberts, Commercial Director of Warwickshire CCC, said: “Birmingham City University has been a fantastic partner of Warwickshire CCC since joining our Commercial Partnerships Programme in 2014. We’re thrilled to extend our relationship with such a pioneering, Birmingham-based organisation through this tailored programme of activity.

“We have worked very hard to develop bespoke activation programmes that support the business objectives of each Commercial Partner and, as a result, we have seen the programme quadruple in value over the last five years."