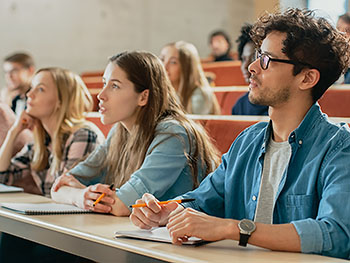 Students at Birmingham City University will begin studying the psychological understanding of mass killing this week in a university module like no other in the UK.

The 12-week module forms part of the University’s Psychology programme and will see students tracing how gun laws in different countries shape the types of mass killing that occur and how legislation can help to reduce gun crime.

Often involving perpetrators who use firearms in their crimes who are labelled ‘spree shooters’ or ‘rampage killers’ in the media, mass killing is the criminal act of deliberately and indiscriminately targeting groups of people, typically unknown and not related to their attacker.

“The mass killing phenomenon is much more nuanced than many people expect,” said Professor Craig Jackson, who leads the module at the University’s School of Social Sciences and has been studying mass killings for a decade.

“Although many think mass killing, particularly involving schools and colleges is a recent problem, students will learn that gun deaths in schools within the USA were occurring quite commonly throughout the late 1800s.

“One of the biggest myths about mass killing that persists is that perpetrators are often mentally ill, but evidence shows this is rarely the case. Perpetrators are more likely to be individuals with deeply flawed and disordered pathological personalities, who hold distorted views about what is acceptable behaviour when they feel angry, isolated or aggrieved, than to have depression or anxiety issues.”

Second-year students will begin the new mass killing module today (Wednesday 25 September), after it was developed as a result of Open Day feedback.

“The module came about from a sample lecture about mass killing that we deliver at the University’s Open Days,” said Dr Amy Cook, Head of Psychology at Birmingham City University.

“We received such positive feedback from visitors that we decided to use staff knowledge to develop it further and deliver this fascinating and contemporary module.

“Not only is the module brand new to our students, it’s also the only one of its kind in UK universities.

“Taking the existing wide-ranging expertise of our psychology staff allows us to provide challenging modules that look at contemporary problems in society, and to understand them in a way that our students find fascinating.”