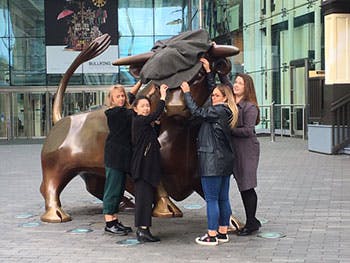 Peaky Blinders’ style flat caps are appearing on some of the city’s most iconic landmarks today, including the Bull at Birmingham's Bullring shopping centre, to celebrate one of Birmingham’s most famous exports returning to our TV screens next week.

Claudia Huxtable, senior lecturer at Birmingham City University's School of Fashion and Textiles, said: "It’s been great to get involved in creating the ‘Peaky Blinders’ cap for the Bull at Bullring. The students have been excited to be working with the BBC prior to the launch of the new series.

There are so many exciting things happening within the city, it seems the collaboration between Birmingham City University fashion students and a major Birmingham-based television series is the perfect synergy.

The 1920s style caps also appeared on the statue of ‘A Real Birmingham Family’ outside the Library of Birmingham and people across the city have been showing their support by donning the statement cap.

Dubbed as #PeakyFriday on social media, the city takeover comes ahead of an exclusive screening of the first episode of the new series of the BBC Two drama in the show’s homeland, Birmingham.

Joe Godwin, Director of BBC Birmingham, says: “Peaky Blinders is a Birmingham story. We’ve all taken it to our hearts and these photos show just how much. It’s great to see so many people sharing their enthusiasm for this wonderful series about our city.’’

‘Peaky Blinders’ returns to BBC Two next Thursday 5 May at 9pm.

A special Birmingham screening for local fans and cast will take place on Wednesday 4 May at The Everyman Cinema, Mailbox Birmingham.