Stress-busting park for the over 40s opens in Birmingham 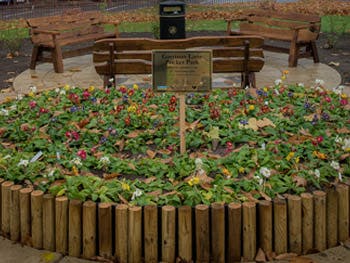 A haven of tranquillity is now being offered to local residents in one Birmingham suburb, as a new park has opened with the intention of reducing stress and the risk of heart attacks and strokes.

Situated within Garrison Lane Park in the Bordesley Village area of the city, the recreational space was created specifically with those aged 40 and above in mind, as it hopes to energise visitors’ minds, bodies and souls.

Stress is a major risk factor in the over 40s and has been shown to increase the risk of conditions like obesity, heart disease, Alzheimer's disease, diabetes, depression, gastrointestinal problems and asthma.

The new Birmingham green space – known as ‘Tranquillity in the Park’ – aims to relax users in a safe space, with dense trees that block out traffic noises, fully accessible semi-ornamental gardens and seating arranged in a semicircle shape to encourage greater interaction among visitors.

Categorised as a pocket park – recreational areas reclaimed from neglected urban areas no larger than 0.4 hectares – the project was the brainchild of academics in Birmingham City University’s Institute for Sustainable Futures.

The project was managed and completed by Bordesley Village Community Association (BVCA), who collaborated with Birmingham City University to secure £14,000 from the Department for Communities and Local Government, with a further £10,000 awarded from the Greggs Foundation.

In 2015, the Government made available a £1.5 million fund to support pocket parks across England, with ‘Tranquillity in the Park’ now one of 87 previously unloved urban spaces transformed into green oases for everyone to use.

“As a University we work hard to support economic, social and cultural improvement within the city and the Garrison Lane Park project offered a fantastic opportunity for us to utilise our academic expertise in a unique recreational setting, just a five-minute walk from our City Centre Campus.

As well as contributing to the project, we hope staff and students at the University will join local residents and enjoy the park as a calming oasis in the middle of our bustling city. Going forward, plans are already afoot for our students to work with local schools in growing fruit and vegetables in three areas within the pocket park.
Dr Umar Daraz

“Furthermore, we will be working with the community on an innovative pilot on how health and wellbeing might be enhanced through the more efficient and effective use of data and intelligent technology, and how such innovation might be utilised around the adjoining parks and canals.”

Landscape experts Professor Russell Goode and Doctor Sandra Costa from Birmingham School of Architecture and Design, part of Birmingham City University, helped generate ideas for the pocket park and held workshops with members of the BVCA, in order for the community’s ideas to be incorporated into the finished design.

Prior to this, postgraduate students on the University’s Planning Built and Natural Environments course carried out a research project that influenced its location within Garrison Lane Park, as they took issues such as traffic, movement of people and pollution in to consideration.

“Bordesley Village Community Association, in conjunction with Birmingham City University, won two bids to create this pocket park. Working alongside partners such as the Department for Communities and Local Government, Greggs Foundation, and Birmingham City Council, we have managed to create a tranquil location for people to go.

“We hope that local people will take ownership of this site over the coming years as the plants and trees grow, and when the park will truly become a sanctuary in this urban location.

It's been an absolute pleasure working with Birmingham City University’s Institute for Sustainable Futures and they are a credit to their institution. I hope we get to work on future projects together, building upon the strong relationship between the University and the community on its doorstep.

Despite achieving fame from appearances in the BBC TV drama ‘Peaky Blinders’, Bordesley Village is one of Birmingham’s most deprived areas. Current access to quality green space is limited, with residents describing the area’s two parks as ‘green wasteland’. Furthermore, Garrison Lane Park is predominantly used by young people aged 25 or under, with its small play area catering for children between one and five.

‘Tranquillity in the Park’, therefore, offers an injection of creativity that introduces a multiuse space for the whole community, particularly those aged 40 and above.

“As a resident of Bordesley Village for 22 years, I am delighted to see the transformation of the park over the last few months. It will be a pleasure to sit on the benches whilst my grandchildren enjoy all the fun things there.

“I am pleased to see we now have baby squirrels, which we haven't seen in a very long while. I would like to say ‘thank you’ to Shabnam Mughal and the people she worked with for all their hard work.”

Both applications for funding were supported by Councillor Shafique Shah – who was both former Lord Mayor and Birmingham City University Chancellor – and Councillor Tahir Ali of Nechells Ward. The team also enjoyed support from Birmingham City Council Head of Parks Darren Share, with his service committing to maintaining the space now it is open to the public.

Alongside Councillor Shafique Shah and Councillor Tahir Ali, staff from Birmingham City University were also present, including Dr Umar Daraz and Makhan Singh, Development Manager at the Institute of Sustainable Futures, with further festivities held close by in Phoenix Hall, which is celebrating its 20th anniversary this year.