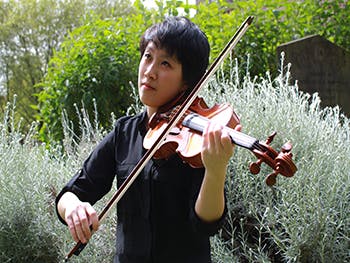 Christmas has come early for three Birmingham Conservatoire students, as they have been selected to join a prestigious Welsh orchestra.

Double-bassist Daniel Vassallo from Birmingham violist Yue Yu from Shenzhen, China, and violinist Yu-Mien Sun from Taipei, Taiwan, will all be performing with Sinfonia Cymru from next year.

Founded in 1996, Sinfonia Cymru is a chamber orchestra made up of professional musicians in the early stages of their careers, and is the first and only orchestra of its kind to be revenue-funded by the Arts Council of Wales.

The three Birmingham Conservatoire students join a small cohort of new performers to the Sinfonia, whittled down from 150 auditions held across the UK in November.

“It is a great honour to have been accepted by Sinfonia Cymru. I have not had much orchestral experience, and being able to play with this ensemble provides me with a great opportunity to learn.

“This was my first audition for a professional orchestra, and my teacher Louise Lansdown gave me plenty of lessons on the excerpts I had to perform in the audition, as well as opportunities to play all the required music in front of classmates, which was very helpful.

I am very excited to meet and play with all the talented players that make up Sinfonia Cymru. I cannot wait for the first project!

Founded by Principal Conductor Gareth Jones, the orchestra tours regularly to venues across Wales including The Riverfront in Newport and Royal Welsh College of Music and Drama as resident chamber orchestra, as well as Theatr Clwyd in Mold, Y Ffwrnes in Llanelli and Pontyberem Memorial Hall.

“It is with immense pride that Birmingham Conservatoire announce the results of the auditions with the innovative chamber orchestra, Sinfonia Cymru.

My training at Birmingham Conservatoire has really helped me to acquire the relevant skills of a professional musician. I am not only receiving amazing musical training, but I am also getting a great deal of support and guidance for my professional development.

“I am thrilled to have been offered a job with Sinfonia Cymru and I look forward to working with some of the best young musicians in the UK soon!”

Sinfonia Cymru commissions new music, with a particular focus on young composers. Furthermore, education and community projects are integral to the orchestra’s activities.

“Following recent auditions at Birmingham Conservatoire we are pleased to add three of the current string students to our pool of freelance musicians. Every year Sinfonia Cymru produces a diverse programme of orchestral, chamber music, education and community activities. We look forward to inviting these young talented players to work with us on a variety of projects in the near future.

“After such a successful first visit to the Conservatoire we hope to strengthen this relationship further over the coming years.”

Birmingham Conservatoire double bass student Daniel Vassallo follows in the musical footsteps of his father, Eduardo Vassallo, who is Principal Cellist of the City of Birmingham Symphony Orchestra (CBSO).