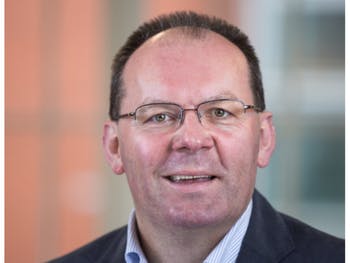 Stephen, internationally known as an ambassador for the city of Birmingham and its music output, will take up the position after spending the last 23 years as Chief Executive of the City of Birmingham Symphony Orchestra (CBSO) - one of the world’s leading symphony orchestras.

He joins the RBC, which produces some of the world’s best performers - including this year’s BBC Young Musician of the Year, Jordan Ashman, a talented percussionist aged just 18 - at an exciting time for the University and the city.

Of his appointment as Principal of the RBC, Stephen Maddock OBE, said: “I am hugely excited to begin my role at Birmingham City University’s RBC – an outstanding Institution with a global reach, which has a great team and also superb facilities in which to create and listen to music.

I look forward to leading the RBC on the next stage of its development, as it continues to open up world-class musical training to the broadest possible range of students.

Professor Philip Plowden, Vice-Chancellor at Birmingham City University, said: “We are thrilled to appoint Stephen to this pivotal role.

“Stephen has had an extraordinary career, one that is steeped in quality and excellence, and he has had a lifelong passion for music education, as well as a deep understanding of Birmingham and the diversity of its musical landscapes.

Royal Birmingham Conservatoire is at the heart of our University and symbolises our long heritage in Creative Arts education, and our commitment to the cultural offer in our communities, the city and the region.

“Meanwhile, I would also like to thank Professor Shirley Thompson for her fantastic service and stewardship in the role of Interim Principal.”

Awarded an OBE for his services to music - particularly across the West Midlands - in 2017, Stephen has been a board member for many organisations, including the Association of British Orchestras, Marketing Birmingham, Warwick Arts Centre and Birmingham Arts Marketing. Prior to being Chief Executive of the CBSO, Stephen was Administrator of the BBC Proms for seven years.

Royal Birmingham Conservatoire is a world-class teaching and performance facility located in the heart of the city, attracting high calibre students, alongside internationally renowned performers and teachers. Its concert and performance spaces provide impressive venues and stage performances for visitors from around the globe.

It was bestowed its Royal title in 2017 by Queen Elizabeth II, and in the same year it opened its state-of-the-art facilities – the perfect fusion of traditional and contemporary.