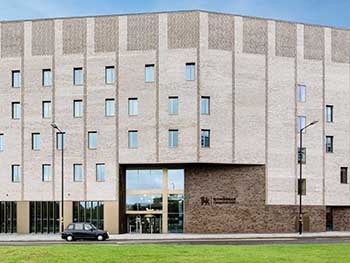 The first digital conservatoire of the 21st Century, Royal Birmingham Conservatoire, has been awarded the prestigious title of ‘West Midlands’ Project of the Year’ by the Royal Institution of Chartered Surveyors (RICS).

At an awards ceremony held last night (2 May) at the Grand Station in Wolverhampton, Royal Birmingham Conservatoire was also honoured with the ‘Design through Innovation’ award for its pioneering approach to lecture and teaching space.

RICS Judges said the Royal Birmingham Conservatoire project - delivered by Feilden Clegg Bradley, Galliford Try, Faithful + Gould and Birmingham City University - was a stand-out ‘Project of the Year’ winner for its complex structural, architectural and services solutions, making it a world-class facility on a national and international stage.

The judges were also impressed with the project team’s commitment to combine traditional practice with modern innovation to maximise the potential for both learning and live performance, also acknowledging that the building will attract further future investment in Birmingham.

The building has rapidly become a hub for the Eastside community.

The historic Conservatoire’s state-of-the-art home is the first purpose-built music college to be constructed in the UK since 1987 and the only one in the country which has been specifically designed to cater for the demands of the digital age.

The Royal Birmingham Conservatoire project will now go forward to the national RICS Awards in November.