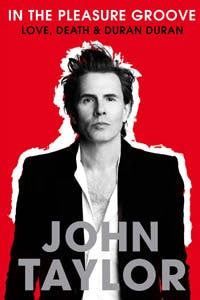 Co-founder and bass guitarist of pop rock band Duran Duran, John Taylor, returns to his hometown of Birmingham and the institution at where he studied this week, to promote his new autobiography.

‘In the Pleasure Groove’ puts John’s partying days into words as he reveals details of life in the spotlight as a member of one of the world’s most successful bands during the 1980s.

On Tuesday 18 September, John returns to his hometown to talk about and sign copies of his autobiography at Birmingham Conservatoire, part of Birmingham City University, the institution at which John studied an Art and Design foundation course when forming Duran Duran.

Formed in Birmingham in 1978, Duran Duran fused pop music with art and fashion, selling over 80 million records worldwide, including the well-known hits, ‘Girls on Film’ and ‘Rio’.

Discussing the book and his reasons for writing it, John said: “I lost the connection to Birmingham and the Midlands. I stopped going there. That’s what really prompted me to start writing, to memorialise my parents and the place. I love Birmingham and always look forward to seeing it.”

John opens up and discusses his life’s highs and lows in the autobiography, including drinking and drug antics. “I’m having a better time now than I’ve ever had, I’m being myself. I did leave the band for a while because I really wanted to get rock solid in this ‘new way of life’ let’s call it.”

“For the first time in my life I became sentimental and nostalgic for the place and times in which I grew up and I found that I enjoyed writing about it. Of course then I had to write about the forming of the band, particularly the first five years. Then I wanted to write about the last ten years, losing my parents and the experience of having a blended family.”

“The group is doing interviews all the time. We have to have this shared approach, where this is very much mine.”

Discussing future plans for Duran Duran, John said: “We’re on hiatus for now, with a plan get back into the studio together in the new year.”

Tickets to attend John’s book talk and signing at Birmingham Conservatoire cost £5 and can be purchased at www.birmingham-box.co.uk.