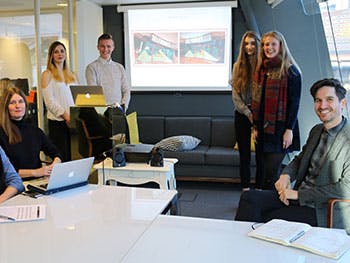 Talented Fashion Business and Promotion students from Birmingham City University have ‘taken over’ Selfridges Birmingham for a term as they learn about retail design.

The students were given the unique opportunity to work with the creative and management team at the iconic Birmingham store to complete their module on Visual Merchandising and Retail Design.

The module over the autumn semester has been based on Selfridges’ theme ‘Material World’, which will be going live at the store this week (from January 5).

Students were set the challenge to explore the current shift within retail environments to curate spaces and acknowledge the creators who are shaping the future of retail design.

The theme has challenged students to looks at sustainability within retail and the brands they work so closely with.

The students’ task was to create and present a visual merchandising strategy based on Selfridges’ innovative concept, and to tap into new ideas and cultural behaviours. They were encouraged to not only put together a development document, but to also develop a visualisation of the retail space before pitching to their course tutor Beth White, the General Manager of Selfridges Birmingham Sam Watts and Visual Merchandising Manager Matt Lightfoot, along with two of Selfridges’ creative managers.

The work, undertaken by around 100 students, was then judged in November in the management suite in Selfridges Birmingham, before the winners were decided.

Beth White, Lecturer in Fashion Business and Promotion at Birmingham City University said: “The 'Material World' brief really challenged the students to think about how retail stores can reposition themselves as a place of learning and interaction that facilitates discovery”.

Sam Watts from Selfridges Birmingham added: “At Selfridges we pride ourselves on our creative edge and pioneering fashion forward, and sustainable approach. We worked alongside BCU last year in a similar project, and it was so popular that we knew it would work well again with this years’ intake of students who have demonstrated an incredible amount of talent and understanding already of the world of retail and visual merchandising.”

We were overwhelmed at the response and everyone's dedication to deliver excellence. The presentations were exceptional and confirmed everything I believe in, that Birmingham is not only the place to be, it's a place to grow and to be inspired.

The work of the students is now being displayed at the University and plans are also in place for the designs to be on display in the Birmingham store later this year.