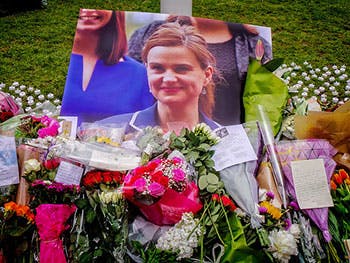 A study of over 50,000 tweets in the month following Jo Cox’s murder and the EU Referendum uncovered many which celebrated the MP’s death, claiming she ‘deserved to die’ or lauding her killer Thomas Mair as a ‘hero’ or ‘patriot’.

The tweets were analysed in a new report out today (Monday 28 November) from academics Dr Imran Awan of Birmingham City University, and Dr Irene Zempi of Nottingham Trent University, published by anti-racism campaign, HOPE not hate.

The authors examined over 53,000 tweets between June 2016 and July 2016, finding that the top 20 words used to describe Thomas Mair and Jo Cox included the terms: Hero, Patriot, White Power, Rapists and Traitor.

A key theme that emerged among these tweets was that Jo Cox ‘deserved to die’ because ‘she supported rape gangs’, with references to the child sexual exploitation scandal in Rotherham, South Yorkshire (Muslims were often labelled as ‘rapists’ in these abusive tweets).

Thomas Mair was depicted in various tweets as a ‘hero’ or ‘patriot’ for murdering Cox, with some users tagging their shared pictures using the hashtag #HeroMair. Others used the hashtags #VoteLeave and #JoCox to call Mair’s actions a ‘sacrifice’, encouraging people to vote Leave in the Referendum.

According to the report’s authors, there is a link between online and offline cyber hate speech. Experiences of xenophobic hostility lead to communities feeling a sense of fear, insecurity and vulnerability. It also leads to an increase in offline incidents where both these ‘trigger’ events (reactions to Jo Cox’s murder and the EU Referendum process) led to a rise in xenophobia, racism and Islamophobia, they conclude.

"Our report shows that sadly after the death of Jo Cox, we witnessed a surge in online hostility directed towards her because of what she stood for. In most cases, the cyber hate speech of this nature was clearly intending to send a message to others that this could also happen to them if they chose to stand up for Syrian refugees.

This shows how the internet acts as an echo chamber for such hostility and reinforces the horrendous messages we captured which called Jo Cox a traitor and that she got what she deserved for voting Remain and also helping Syrian refugees.

"Jo Cox was an advocate for the Remain campaign, which advocated for the UK to stay within the European Union. In our report of cyber hate speech on Twitter, we found that Jo Cox was often referred to as a “traitor” and the “enemy within” who “deserved to die”, whilst her killer, Thomas Mair, was described as a “hero” and a “patriot”, who was unlawfully imprisoned.

"In line with the latest Government hate crime action plan, we offer key recommendations that will help prevent and respond to cyber hate speech on Twitter based on our current findings."

Nick Lowles, HOPE not hate chief executive, said: "Thomas Mair acted alone but he was inspired by over 30 years of reading Nazi propaganda.

"Clearly there were those on social media and other digital platforms who sought to exploit and profit from his disgusting actions, and the tensions also arising from the Referendum process, to spread their vile beliefs.

"It is time for the authorities to take greater note of these ideologues of hate, and time too for social media companies – and Twitter in particular – to up their game when it comes to providing a safe platform for expression. Free speech does not equal hate speech, which can have very real consequences and impact in communities in the UK."