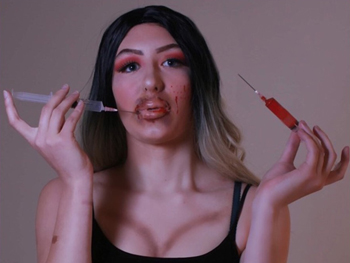 Centuries of dangerous practices used by women in the pursuit of beauty are being showcased in a new project revealing brutal beauty regimes, from sewing hair into eyelids to replacing eyebrows with mouse skin.

Birmingham City University Design for Performance student Amber Ayers has produced a range of new images showcasing the beautification processes used by women over the ages from the ‘absurd’ to the lethal.

The challenging portraits show the lengths women would go to conform to societal standards of beauty from ancient Egypt, Elizabethan and Victorian England, to today’s Instagram age.

Amber is bidding to reveal the extent of the pressures facing women, leading some to endure painful and gruesome procedures, while also charting the history predating the trend for injectables such as Botox and collagen by hundreds of years.

Among Amber’s discoveries were processes taken by English aristocrats, Egyptian royalty and centuries of other women across the globe, which include:

Amber’s studies, which focus on creative design, used makeup, hair, wig styling, costumes and Photoshop to produce the images, which recreate some of the most shocking sights.

She believes influencer and celebrity culture in today’s society has replaced the pressures to be seen as affluent, which hallmarked the acts of previous generations.

Amber Ayers said: “We have tested and regulated a lot of procedures, beauty and makeup products throughout the years, but you still hear so many horror stories online and in the news about women and men putting themselves through unnecessary treats to ‘look better’.

“I think we will forever be testing new beauty products and procedures which could potentially be dangerous and viewed as absurd, but unfortunately this is the only way we learn. Just like we learnt the hard way not to put lead on our faces like they did in the Elizabethan era.

I believe pressure is put on the younger generation through social media. There are way too many influencers and famous people creating standards that are impossible for young women to meet without having some kind of injection or using some ridiculous beauty regime.
Amber Ayers

“A lot of young girls are impressionable and will believe anything an influencer will say. I’m not saying that all famous people or influencers are bad people, but there are standards being set that could lead to young women potentially putting themselves in danger.”

All images in the collection were captured by fellow Birmingham City University student Paige Bowater who studies photography.

The project was produced as part of Amber’s end-of-year project and was displayed at Birmingham City University’s Inspired Festival, which showcases the work of students studying on courses in its Arts, Design and Media Faculty.

Amber hopes the images will help people to think again about the actions they take in the hope of looking beautiful, and highlight quite how absurd and brutal some practices are.

She added: “I hope the impact this project has on people is just realisation, realisation of the fact we have a problem within society. Hopefully this project makes people stop and think for a second and question their views and choices when it comes to beauty.