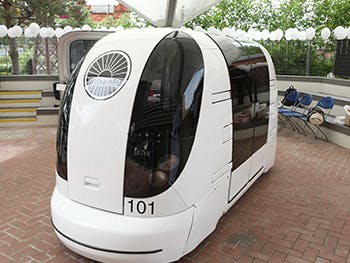 State-of-the-art driverless low speed vehicles known as autonomous Pods, which are being developed to make travel easier particularly for blind and visually impaired people, are on display to the public this week (Monday 29 May – Friday 2 June).

The innovative INSIGHT project, will see an all-British consortium transform Heathrow Ultra-Pods into hi-tech autonomous vehicles. The Pods, which are designed to help plug the gap for short low-speed journeys, are described by project team as a ‘last mile’ transport solution, being ideally suited to moving people and luggage between local railway stations, hospitals and car parks.

Equipped with sophisticated 3D-imaging systems and sensors, that are designed to enable the Pod to navigate through pedestrian areas while ensuring the safety of passengers, pedestrians, road users and other vehicles. Inclusivity is a key feature of the INSIGHT Pod, which includes several innovative features specifically designed to support visually impaired members of society use the Pod.

One of the Pods will be on display on show at the Thinktank Science Garden in Birmingham’s EastSide from Monday to Friday, to allow all members of the public including blind and visually impaired users, to examine the Pod, quiz experts behind the project and provide valuable feedback to inform the Pod’s future developments.

The event is being hosted by the INSIGHT project team – an industry and academia partnership, made up of Birmingham City University, Heathrow Enterprises Ltd, Fusion Processing Ltd, and local firms Westfield Sportscars Ltd (Lead Partner) and Conigital Ltd – to give the public a chance to give their views on the project.

We are really excited about giving local people the opportunity to see one of these vehicles and to find out more about what the project is doing and importantly influence the Pods’ future development.

“It is great that we will also be able to give blind and visually impaired groups the chance to give their feedback on the Pods, which will be key to fine tuning them and making sure they meet the needs of users who may have difficulty travelling independently in busy city environments.

“This project is a great example of bringing a range of public and private partners together to test what can be done in the fast moving world of autonomous vehicles and we hope as many people as possible will have the chance to come along see the vehicles and talk to the team.”

Thousands of people are expected to get a glimpse of the Pod over the five-day period.

Key groups are already set to attend the display including Beacon Centre for the Blind, to give real potential users of the vehicles the opportunity to give their views on how the Pod could impact their lives.

The INSIGHT project was awarded £2.2 million of government funding from the government’s Intelligent Mobility Fund last year to transform the hi-tech Ultra Pods into autonomous Pods which could be used to improve accessibility for people who have difficulty traveling independently.

Unlike the Heathrow Ultra Pods, currently in use at Heathrow Airport, the INSIGHT Pod will not need to run on guides or tracks and will instead use sensory data to move safely around its environment.

Advanced indoor and outdoor positioning systems will allow blind users to know their exact locations using a smartphone app and will link to a cloud-based system which will allow nearby vehicles to be virtually requested or ‘hailed’.

Academics and researchers at Birmingham City University will work alongside the public, industry experts and Birmingham City Council to compile detailed safety cases for the use of the Pods and run trials in increasing complexity leading to a trial with members of the public, including blind or visually impaired citizens in pedestrianised areas.

The Pod will be on display each day from 10am to 4.30pm and project staff will be on hand to answer the public’s questions and discuss the project.