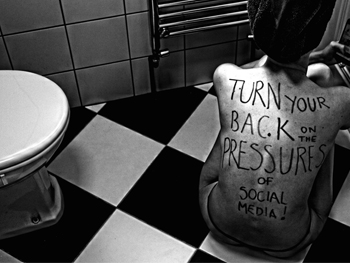 A popular Instagram user has created a series of stark images to hit back at the dangers social media profiles pose to young women’s representations.

Jade Johnson, a Visual Communication student at Birmingham City University, has produced the Un-Edit campaign to highlight the impact Instagram users and celebrities have on encouraging women to conform to activities such as dieting and having cosmetic surgery.

The 22-year-old, who has nearly 2,000 followers on the photo site, worked alongside fellow student Laura Dawkes (22) to draw up the powerful images after becoming disillusioned with her own representation on the site.

The images are created from a series of photographs the pair set up, showing young women in a range of situations such as taking selfies after surgery, wrapping their bodies in cling film and injecting themselves with lip fillers.

Each photo is accompanied with lines of poetry which challenge the view of reality presented on social media platforms and the pressure placed on women to conform – particularly following the rise of ‘selfie’ culture.

Johnson said: “The ideas behind the images came from personal experiences that had affected me through my life that I feel affect women every day.

In my second year at University I felt that I began to get sucked into the world of social media and built my personal profile around this. Even though deep down it made me feel terrible as I was no longer being who I wanted to but what social media wanted me to be.
Jade Johnson

“The campaign was built to show women we do not need to give into the pressures of social media and we should be proud of who we are and rather than letting it bring us down.

“We wanted Un-Edit to build us back up and give women that confidence to believe they are beautiful.”

Un-Edit takes the form of a digital magazine, as well as its own Instagram profile which has already gained almost 500 followers.

The campaign was publicly showcased during the University’s Inspired Festival, which highlights the work of students in arts and innovation subjects.

New images will be added to the campaign over the coming months and Johnson has already been enlisted to talk to young people and students on the issues raised.

Visit the Un-Edit magazine website to see the full campaign.