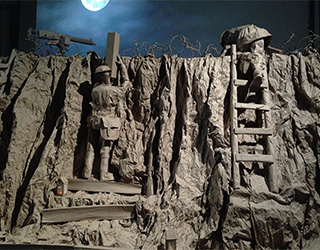 A poignant installation made up of paper and cardboard, has been unveiled at Birmingham City University this week, which will mark 100 years since the First World War.

Using the Battle of the Somme as the setting, in which more than one million men were wounded or killed, the student-curated exhibition takes visitors on a journey back in time to show the hardships and struggles of soldiers in the battlefield.

Life-size trenches, poor outdoor sleeping quarters and injured soldiers are some of the sets that have been created out of brown paper, which give a touching snapshot into a ‘typical’ day on the battlefield during World War One.

Hollie Wright, Lecturer and Project Leader for The Paper Installation said: “This was a unique chance for our students to work at a full scale with the challenge of limited materials. We were aware that the sensitivity of the subject matter presented further challenges, however with this being the centenary year for World War One we had full confidence in the students research, skills and abilities to realise this to the high level presented."

Time-lapse footage of the exhibition

With a budget of only £450 and less than four weeks to complete the installation; First Year Theatre, Performance and Event Design students worked tirelessly to put a show-stopping set on display fit with sound-effects and impressive lighting to create colour.

“As well as abilities that are difficult to teach like tenacity and determination. I’m particularly proud of the way that this group has dealt with such an emotive subject in such a mature and respectful manner."

Students drew on inspiration from the work of leading war poets Wilfred Owen, Woodbine Willy and Charles Hamilton Sorley, who all wrote about the shocking and sad horrors of life in the trenches.

The TPE Paper Installation: Battle of the Somme is on display at Birmingham City University’s Parkside Building, in The Shell Theatre until 4 March. The exhibition is open to the public from 10am – 5.30pm weekdays.