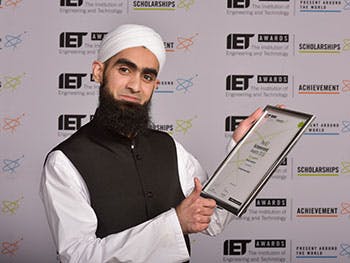 A Pakistani student at Birmingham City University has been awarded an Institution of Engineering and Technology (IET) Undergraduate Grant in recognition of an outstanding performance on his course.

Electronic Engineering student Salman Abdullah from Lahore competed against thousands of students from all over the UK to receive one of the 10 £1,000 prizes on offer, which will assist him during his final year of undergraduate study.

The IET is a professional society for the engineering and technology community and, with more than 150,000 members in 127 countries, is one of the largest organisations of its kind in the world.

“I was more than happy when I found I had won – I was overjoyed. This award is not just for me. It also shows the hard work of the staff who have helped me to get where I am. I am a proud member of Birmingham City University, and pleased to be representing my University with this award.

Winning the IET Award wasn't as easy as it sounds, as I was competing against thousands of students from all over the UK. Also, it wasn't just a one-day performance which counted towards the award, but an amalgamation of the work of I have done over the last three years.

Salman Abdullah, aged 25, studied at SICAS in Lahore before securing a bursary from Birmingham City University, which made it possible for him to come and study in the UK.

Salman managed to seal a placement year at Birmingham City University during his studies, teaching foundation and first year students on the Electronic Engineering course. He was also engaged with several academic projects during his placement, including working with a team to design an automatic blaze detection system to protect woodland areas from forest fires.

He also won first prize last year in the Cisco Hackathon; a competition where students from all around the globe participate. Furthermore, Salman is a course representative, directly liaising with his course director based on feedback received from students on his degree programme.

Salman is on track to achieve a first class degree, and his tutors are encouraging him to remain in the UK and undertake an MEng qualification at Birmingham City University after completing his BEng.

“Our scholarships programme is all about rewarding talent and assisting young people to continue their engineering studies. It is vitally important that we support engineering students who will go on to become the leaders of tomorrow in an industry which offers a modern, creative and diverse range of exciting opportunities and challenges.”

Salman was presented with his award at the IET Awards in London on Wednesday 16 November. The IET Awards recognise some of the world's most outstanding engineers and technologists and acknowledges the talents of exceptional apprentices, students and young professionals.