Oscar for being the best at student support 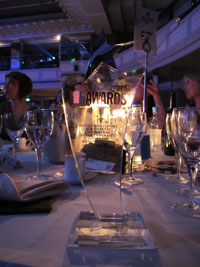 Birmingham City University’s commitment to putting students first has been recognised with the equivalent of an Oscar in the world of higher education accolades.

The Student Academic Partners (SAP) scheme, a unique partnership involving Birmingham City University and its Student’s Union, has beaten off national competition to win an accolade in the prestigious 2010 Times Higher Education (THE) Awards.

Broadcaster and former government minister Michael Portillo said “this is the University that supports students the best” as he revealed that the SAP scheme had won its category at a prestigious ceremony attended by 1,200 guests from across the sector, including Universities Minister David Willetts.

The scheme, which aims to empower learners, topped the ‘Outstanding Support for Students’ category after judges said it was a “truly outstanding example to others across the sector”.

The SAP programme contributes to the Higher Education Academy through its Evidence-informed Quality Improvement Programme (EQUIP), which helps higher education institutions to identify, understand and resolve key issues affecting the quality and effectiveness of the student learning experience.

Professor Mary Carswell, Pro Vice-Chancellor at the University, said: “This is fantastic recognition to our core commitment of putting students first.

“What made our submission really stand out is the fact it’s a partnership between the University and its Students’ Union.

Professor Stuart Brand, who led development of the SAP scheme with the Students’ Union, said at a time when students can too easily be viewed as “passive consumers” the judges were impressed that at Birmingham City University learners were proactively integrated into the fabric of their learning and research communities.

“The SAP initiative is an example of how we are working in close and effective partnership, actively encouraging our students to become part of the learning process,” added Professor Brand, Director of the University's own learning lab, the Centre for the Enhancement of Learning and Teaching (CELT) now known as EDS.

“I really do believe we have developed something that is unique and I hope will inspire and influence the sector.”