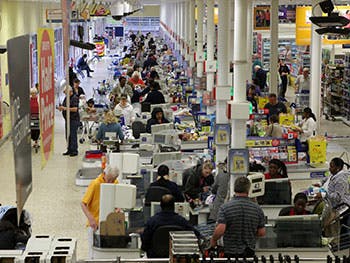 The government should make the deliberate placing of sweets, chocolate and crisps at till points an illegal practice - a Birmingham City University nutritionist is arguing.

"If the government has banned cigarettes from being on display, it's about time the same principle was applied to unhealthy snacks which we can see are having a direct impact on our NHS services," said Mel Wakeman, a senior lecturer in nutrition and applied physiology.

"As a nation we should be reducing much of the added sugar in our diet but we need help to do this. Being constantly tempted to pick up junk food at the checkout is undermining our efforts to be healthier. The UK is in a captive junk food market and stores need to have more socially responsible marketing policies that don’t encourage unhealthy impulse buys."

Discount supermarket Aldi banned all confectionary from their checkouts in January 2015, following a trial of displaying healthier options of fresh fruit and nuts. Mel has now sent letters to other stores including Marks and Spencer, Asda, Sainsbury's Local and WHSmith, urging them to follow Aldi's example and take more responsibility for the products that they promote.

Mel has received responses from Marks & Spencer, Asda and WHSmith, but is yet to receive a reply from Sainsburys.

"Marks and Spencer's response was very disappointing, as was WHSmith's," said Mel. "Both stores seem very keen to pass the buck and make huge assumptions about their customers' requirements and habits.

"WHSmith said that they train their staff to never offer promotions repeatedly to regular customers or to anyone who has made it known they do not wish to be advised about such promotions. Can someone tell me how a WHSmith cashier would keep track of if a customer is regular and if they have previously requested to not be told about unhealthy till point promotions?

"We need the government to better protect the future of the British public and for the facts about obesity to be realised. Children and teenagers are now consuming around 40 per cent more added sugar than the daily recommended allowance and we’re now seeing diabetes, high blood pressure and signs of heart disease in young children."