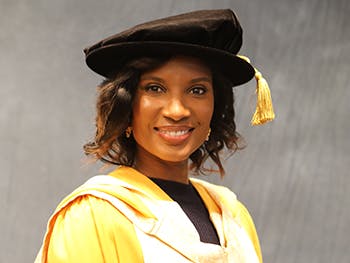 Celebrated broadcaster and Olympic athlete Dame Denise Lewis OBE has said more inclusion and representation at senior management and board level must occur in UK sport, whilst attending a graduation ceremony to receive an honorary doctorate from Birmingham City University (BCU).

The celebrated West Bromwich-born presenter, Gold Medal-winning heptathlete and President of Commonwealth Games England also gave an emotionally charged speech to graduates and academics, as the University’s highest accolade was conferred on her at Birmingham’s Symphony Hall.

“I am beside myself with pride and joy to receive an honorary doctorate from Birmingham City University. The city has played an integral role in my life and my career to this point so to be receiving the honorary degree means everything to me, it's full circle, like I’ve come home and so I’m absolutely thrilled.”

Speaking prior to the ceremony, the broadcaster said: “One of the benefits of athletics is that it is inclusivity and diversity on the field of play. We’re trying to change that as we go higher, at board and senior management level. It’s important to encourage people to think differently, to inspire change-making, and to consider inclusivity and lived experience.

"We say sport is for all, however, sport hasn't actually delivered that in many sports and areas; so it is time for change. There have been a lot of conversations had, now its time for action.

Denise Lewis is one of the “golden girls” of British athletics, winning gold at the 2000 Sydney Olympics and subsequently being inducted into the UK Athletics Hall of Fame in 2011. Denise has twice been runner-up in the BBC’s Sports Personality of the Year awards (in 1998 and 2000) and was also honoured with an OBE in the 2000 New Year Honours as well as becoming a Dame in early 2023.

Lewis used her speech following the award to congratulate students on their achievements during the pandemic, encouraging them to go on to ‘have fruitful lives’, saying: “Being authentic to who you are is important, be true to yourself. Also, have courage too. I wouldn’t have pursued the life in sport that I’ve had if I hadn’t had a bit of courage; be your own champion.

“And finally, be a decent human; be lovely, be kind. Everyone has their own platform so try and use that to the best of your ability.”

“It’s a huge honour to be bestowed upon me and I just hope that my friends, family and anyone who has looked up to me can share in this moment and feel that anything is possible - because I’m just an ordinary girl from the Midlands and so many wonderful things have happened to me.”

A Strictly Come Dancing and The Masked Singer participant, Lewis is also a brand ambassador for Next, with new activewear range launching in 2023, and has worked with multiple other brands including L’Oréal, Haven and Purple Bricks.

Each year, Birmingham City University makes a number of honorary awards that recognise outstanding service to the University, to the city of Birmingham and the wider West Midlands region, or to public or professional life, nationally or internationally.