No Outsiders: The view of an academic with a PhD in LGBT-inclusive children’s literature 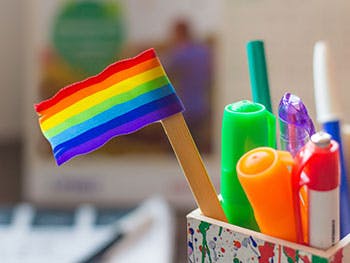 Parents continue to protest the teaching of relationships education in Birmingham schools, claiming children are subjected to “indoctrination” and the “aggressive promotion” of “other types of lifestyles” – ‘other’ meaning ‘non-heterosexual’.

Teaching social diversity in the classroom using children’s literature attracts much of the protesters’ ire. Having written a PhD on picture books featuring representations of families with two mums or two dads, I know just how important it is to understand the history of these books and why classrooms need them.

The No Outsiders project began in September 2006 and sought to develop and evaluate strategies for providing an inclusive educational environment for pupils, parents, and teachers from all backgrounds. For primary-age children, one particularly effective strategy was to use literature as a stimulus for broader class discussions and creative activities where they could include and relate their own life experiences to those of other students in their class and beyond. The work focussed on fostering inclusivity based on those identity characteristics protected in equality law – things like age, disability, sex, race, religion, and, as part of this wider agenda, sexuality. Most of these ‘protected characteristics’ are things that we cannot choose or things, like religion, that we are born into, again, usually without our say. Yet, it is upon these characteristics that groups of people have historically been victimised.

Just three years prior to No Outsiders, conversations about being gay, lesbian, or any other non-heterosexual identity in schools were illegal due to a now infamous piece of legislation: Section 28. Introduced in 1988 in the UK, Section 28 prohibited any state-maintained children’s service from ‘promoting homosexuality’ or teaching ‘the acceptability of homosexuality as a pretended family relationship’. The introduction of this legislation was influenced, in some part, by children’s literature featuring same-sex parents. Jenny lives with Eric and Martin, a story about a child (Jenny) who lives with her father (Martin) and his boyfriend (Eric) – the only picturebook featuring gay parents available at the time – has been cited as a reason for the introduction of section 28.

In a House of Lords debate on the repeal of Section 28, now-retired Baroness Knight of Collingtree said, “I do not know what could cause more grave harm than to try to promote, as does the book  marriage as being outdated; that we should not have a mummy and daddy and can just as well have a daddy and a homosexual lover.” It appears, however, that the introduction of section 28, had an unintended consequence: a global boom in publication of children’s books featuring gay and lesbian parents.

As with any other prohibition, a ban drives demand and the underground gets to work. 1989, the year following Section 28’s introduction, saw the publication of two seminal picturebooks from the now shuttered Alyson Wonderland press, Daddy’s Roommate and Heather has two Mommies. Positive representations of lesbian mums and gay dads were now available in children’s books. Since then, we’ve seen the publication of the bestselling And Tango Makes Three – a story about two male penguins that hatch an egg together – and several others. But it is unlikely that you will find these next to Mog in your local bookshop. I should know, I’ve hunted them all down and probably own the largest collection of these books you could find in the world. I’ve spent a significant amount of my life researching and writing about them. The takeaway message from the vast majority of them is that it doesn’t matter what you or your family looks like, what matters is being part of a loving family. Dominant social values about marriage and traditional family values are fundamental to their representations.

But the parents aren’t straight.

Why should that matter? These books do not sexualise children. They never talk about sex. Ever. These books foster discussion about social plurality, discussions about us being united in – and despite of – our differences and that we can all find a home in that social institution of the family, which comes in all shapes and sizes.

What worries me about these protests is that they represent a backsliding. We’re witnessing arguments and language being recycled from the days of Section 28 – 'exposure', 'promotion', 'traditional relationships'. We’ve had this argument before and have seen it denounced. These books aggressively promote nothing except tolerance and it would be a shame to see them again used as a prop to legitimise regressive, homophobic attitudes. British law defends a rugged social pluralism, and it is upon this law that the curriculum being protested in Birmingham is based. The message of No Outsiders is that ‘it’s ok to be different’ – something those parents protesting should bear in mind.