New till receipt design could make us healthier, say academics 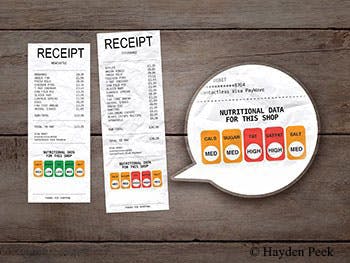 A new traffic light system which uses till receipts to display nutritional information for an entire supermarket shop could revolutionise the way we buy food, say academics at Birmingham City University.

The system shows the total data for calories, sugar, fat and salt in a person’s shopping basket and highlights the total in a green, amber or red colour to help people make healthier choices about their food.

It would allow people to see instantly if their regular food shops are too high in certain elements, meaning they can tailor future shopping trips to reduce potentially harmful intakes.

Current front-of-pack (FOP) traffic light labelling provides nutritional information on a product by product basis. The new concept, which is being shared as part of National Childhood Obesity Week (3 – 9 July), aims to evaluate the nutritional content of a consumer’s entire supermarket trolley. Providing consumers with a more accurate overall picture of the healthiness of their purchases.

Research into the project shows that more than 83 per cent of people currently use traffic light information to assist them in making their food purchases and more than half said they would like to see the total data displayed on their shopping receipts.

A new receipt-based system could bridge this gap, and provide an additional tool to help aid consumers in their food purchases, providing an overall summary of their entire food purchases.

Cole is working alongside London based creative designer Hayden Peek, who came up with the till receipt concept. Initial research carried out looked at the extent to which consumers use the current system to make their food choices and whether an alternative receipt-based summary may be a more useful tool. Over 50 per cent of those who took part in the survey stated that a receipt based system would add additional value and help aid their purchasing decisions.

Research also revealed that the majority of respondents considered health to be the most important factor when making food choices, suggesting the receipt could play an important role in changing people’s shopping habits.

Over 42 per cent of people said health was their key consideration while only 23 per cent cited cost, despite most previous research highlighting this as the main influencer.

It is hoped that the new concept could also be incorporated into supermarket self-scanning devices which could track the nutritional value of a shop as consumers go, and offering up alternative ‘healthier’ products.