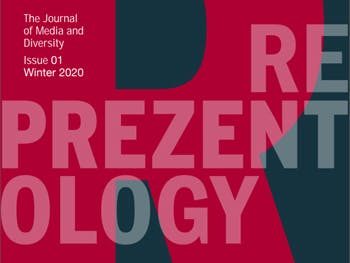 A unique new publication shining a light on diversity across all forms of the UK’s media industry has been launched.

The new journal titled ‘Reprezentology - the Journal for Media and Diversity' has been supported by Birmingham City University and Cardiff University to examine how the country’s media represents the population it serves, and is the first publication of its kind to bring together academia and media practitioners for a mix of research and written articles.

Reprezentology was founded following talks between Birmingham City University’s Sir Lenny Henry Centre for Media Diversity and Cardiff University, with the shared ambition of conducting new research into media representation, and featuring articles from leading figures in the fight for better representation.

It will tackle subjects spanning all protected characteristics including race, gender, sexuality, class and disability, as well as the intersections between them.

Articles featured in the first edition include:

The journal is edited by critic K Biswas who has written for a number of publications including the New York Times, New Statesman, The Nation, and the Times Literary Supplement. He is also the founder of The Race Beat, a new network for journalists of colour working in the UK.

K Biswas said: “It is an honour to edit the first edition of this vital publication, which includes contributions from media heavyweights and brings to light important facts and
experiences around diversity in the UK.

We want Reprezentology to feel different to other publications, straddling the line between the academy and those at the heart of the British media.
K Biswas

Reprezentology - the Journal for Media and Diversity wishes to help create a media that reflects the richness of every part of British society.

Publishing editions twice a year, the journal will be available to view here: www.bcu.ac.uk/reprezentology-journal

Professor Philip Plowden, Vice-Chancellor at Birmingham City University, said: Birmingham City University is committed to equality, diversity and inclusion, and we are delighted to be working with our wonderful Chancellor Sir Lenny Henry, and our friends at Cardiff University in launching Reprezentology. This year has taught us a lot, not least that achieving and celebrating racial equality is long overdue.

“Written in plain language, and free to download, we want to open up this conversation to those who are best placed to inform real change. Universities are a vehicle to enable transformation, and as such, it is our duty and our passion to actively promote social progress through learning, research, innovation and collaboration.”

Professor Colin Riordan, Vice-Chancellor at Cardiff University, said: “As is the case in many areas of society, the mainstream media often inadequately represent the diversity of the society they purport to reflect.

“Power structures, financial models and appointments to influential management and editorial positions all can and do militate against a representative media industry. Reprezentology aims to do something about that.

“This is a ground-breaking project that will celebrate and enrich the cultural industry as a whole, and will give a broader-based platform to a wider range of voices and views than we have seen up to now. In this way Reprezentology addresses a problem that affects not only the media, but all of us, at a time when change is urgently needed.”