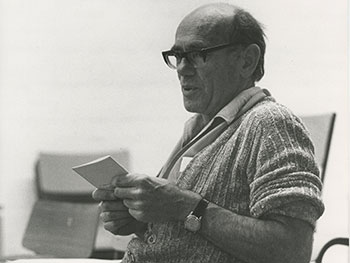 Violists from around the world are to compete for a £2,000 prize in the first Cecil Aronowitz Viola Competition this month, to be held at Birmingham Conservatoire from 24 – 26 October.

Dedicated to Cecil Aronowitz, the South African violist and long-term collaborator with Benjamin Britten, the three-day event is open to under 21’s and will see thirteen semi-finalists competing from countries across the globe, including Switzerland, South Korea, Lithuania, China and Germany.

Louise Lansdown, Head of Strings at Birmingham Conservatoire, said: "In light of recent national reports on string playing and teaching experiencing major financial cutbacks, this competition is intended to raise awareness of excellence, nurturing of young talent and the importance of investment, inspiration and encouragement for aspiring musicians right from the very beginning of their musical journey.

"A stark comparison springs to mind between the level of financial investment pledged to the training and promotion of sport, along with an out of control salary scale for many of its great protagonists. Looking after future generations of musicians who will be constructing the edifice of our music world should be as much of a national priority as ensuring we win the football world cup!

"We have some brilliant young musicians competing in the very first year of this competition and I hope its popularity will continue to grow for years to come."

Members of the public are welcome to watch the competition which is part of a mini-festival of other events, including a talk led by friends and family members of Cecil Aronowitz.

There will also be the opportunity to watch esteemed violist and teacher Roger Chase lead master classes with students on 25 October.

The weekend culminates with the final of the Cecil Aronowitz International Viola Competition with musicians competing for first prize, accompanied by Birmingham Conservatoire String Orchestra.

See full details of the competition and weekend events