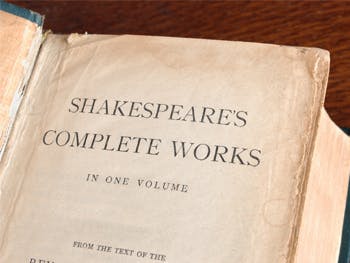 The Shakespeare Birthplace Trust is launching a new exhibition celebrating the vibrant cultural responses to Shakespeare across South Asia.

From 26 May – 8 September, Shakespeare in South Asia offers a glimpse of South Asia’s fascination with Shakespeare, and his enduring influence on the cultures and lives of its people.

Completed in collaboration with students from Birmingham City University's School of English, the exhibition takes visitors on a visual tour of each of the eight countries that make up South Asia (Afghanistan, Bangladesh, Bhutan, India, Maldives, Nepal, Pakistan and Sri Lanka) offering an intriguing snapshot into each country’s relationship with Shakespeare and how they have made him part of their own evolving history.

Elizabeth Dollimore, Informal Learning and Programmes Manager at the Shakespeare Birthplace Trust, said, “We are delighted to be producing this exhibition as part of our programme showcasing the notion of Crossing Borders. Shakespeare’s works have a long and complex relationship with South Asia, a relationship which has sometimes been tested by the colonial context but which has been the root of extraordinary artistic and intellectual energy.

"The exhibition will explore Shakespeare as the international figure who crossed borders and explored issues that are relevant even today.”

Content curator, Dr Islam Issa, who is Academic Advisor to the Shakespeare Birthplace Trust and Lecturer in English Literature at Birmingham City University, said:"This exhibition doesn't just showcase Shakespeare's reach, but also tells us that different cultures around the world can interpret and use Shakespeare in ways we might not expect.

Given the overarching contexts of British colonialism and influence in the region, it has been interesting to see the different ways in which performances in South Asia serve different purposes - from cultural to social to political.
Dr Islam Issa

"Curating the content for this exhibition has been a pleasure, particularly as the six BCU students who took on the role of Curating Assistants managed to find some fascinating and varied narratives and visuals. They've also learnt a range of skills in the process, not least the importance and thrill of public engagement."

In celebration of South Asian music, the Trust has commissioned seven new musical compositions inspired by Shakespeare to complement the exhibition. The works cover a wide range of genres, some influenced by South Asia, and others with their roots in contemporary UK culture.

Visitors can listen to original music composed by artists including beat-boxer Jason Singh, Ranjana Ghatak and composer Mathew Forbes, each taking inspiration from Shakespeare’s works with an Asian twist. Musicians from the Birmingham Conservatoire will also explore the relationships between Shakespeare and India in ‘My Heavenly Jewel’, a classical piece inspired by Shakespearian and modern Indian romance.