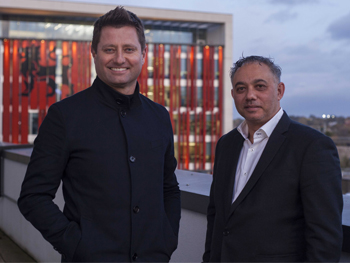 Television architect and presenter George Clarke called for state intervention to solve ‘the biggest housing crisis the country has ever seen,’ as he was unveiled as a Visiting Professor at Birmingham City University.

During a visit to the University in which he was officially awarded the accolade, George spoke about his passion for affordable homes, the challenges posed by the UK’s housing crisis and the need to modernise the industry.

The face of Channel 4’s ‘George Clarke's Amazing Spaces,’ ‘Old House Beautiful Home’ and ‘Restoration Man’ has been handed the role as Visiting Professor in Architecture and Design at the Birmingham School of Architecture and Design which will see him make regular visits to the University to give lectures, work with students and offer his advice.

Speaking at the announcement George Clarke said: “I recently launched the show ‘the Council House Scandal’ because I’ve been passionate about affordable housing for more than 15 years.

“This show is the best thing I’ve made. We’re in the thick of the worst housing crisis this country has ever seen and the only way to get out of it is for the state to start building again.

“We’ve tried the private sector and it hasn’t worked, so it’s time for the state to step in, and we know that councils want to start building again.

I was brought up on a council estate. It was a new town with 80,000 people living there. It had the best architects, builders, planners, and it was a fantastic place. Right to buy has caused council housing and affordable public housing to collapse.
George Clarke

George Clarke has a long history in supporting young people to innovate in the design and construction of homes, having founded education charity MOBIE, (Ministry of Building Innovation & Education) which aims to help the next generation shape the way people live.

He has also been a central figure in the creation of Birmingham City University’s new course ‘Design for Future Living’, which aims to teach students the skills to solve challenges like housing shortages, sustainable housing and the use of contemporary off site construction methods.

Speaking about his appointment as Visiting Professor, George Clarke said: “Birmingham School of Architecture and Design is a really forward thinking institution and I know a lot of the academics here and they are really likeminded. Birmingham itself is currently experiencing a massive amount of change, even having HS2 built right here.

“Being appointed Visiting Professor is a huge honour for me. I’ve been teaching architecture for many years and it’s where I started really. But this is a massive honour, I’m very proud and my mum will be too.”

Professor Julian Beer, Deputy Vice-Chancellor at Birmingham City University, said: “Our University has been a part of Birmingham for over 175 years, and our role has always been to serve this city and the wider community.

“George has a real vision to transform housing in this country and improve the lives of people right across the UK, and it is this drive and ambition which makes this appointment so exciting.

“George’s role here, will not just benefit the staff and students at the University, but will also have an impact on the people of the West Midlands and far beyond.”

Birmingham City University’s School of Architecture and Design has a long history in the city dating back to the 1904.

The School is now based at Birmingham City University’s City Centre Campus, in Birmingham’s Eastside which has undergone a major transformation in recent years and will be home to the HS2 rail station.

Professor Kevin Singh, Head of Birmingham City University’s School of Architecture and Design, said: “George’s passion and zest for addressing the issues facing the UK’s housing market are clear for all to see and that is why we are all so delighted to have been able to name him as a Visiting Professor here.

“George has shown great enthusiasm towards our students every time he has visited and this is a real opportunity for them to learn from such a passionate, experienced, high profile and talented professional who can help support the next generation of architects and designers who will be the ones tasked with carrying out the solutions to the challenges we currently have.

“We were very fortunate to have had the opportunity to work closely with George to develop the Design for FutureLiving course, and we are equally delighted that we’ll now have an even closer working relationship.”