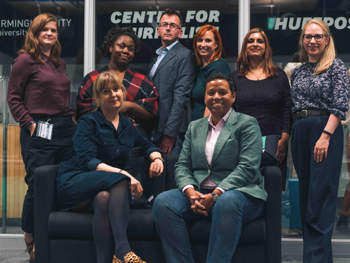 HuffPost Editor-in-Chief Lydia Polgreen traded New York for the second city to launch the ‘HuffPost Centre for Journalism’ in Birmingham.

The “HuffPost Centre for Journalism” is a new partnership, which highlights HuffPost’s focus on quality journalism and Birmingham City University’s passion for breaking traditional media forms.

It will see students undertake two key modules; ‘Disruptive Publishing’ and ‘Journalism Innovation,’ in which HuffPost editors will work alongside aspiring journalism students on briefs, before tasking them with presenting ideas, solutions and pitches.

A rebranded newsroom has also been created at the University, where students will be given hands-on training to set them on a positive career pathway into journalism. Students will also have the opportunity to visit the HuffPost’s London headquarters, and drop-in to monthly editorial meetings to get first-hand experience of how an editorial team create premium content for their audience.

The launch event featured a special talk titled ‘In Conversation with Lydia Polgreen on the Power of Telling the Truth’. During the talk, in front of a 130-strong live audience, Lydia discussed her award-winning career in journalism, including her 15-year tenure at The New York Times prior to becoming Editor-in-Chief at HuffPost.

Ms Polgreen also tackled the future of the news industry in the event, which was held at the University’s Parkside Building, where she talked to importance of news and talking to communities.

The heart and soul of our reporting is going out and telling the stories of ordinary people who find themselves caught up in great difficulty.
Lydia Polgreen

‘You must have a newsroom that reflects those types of communities you’re talking to.’

The visit also saw a range of activities hosted at the University throughout the day, including students taking on real-world challenges set by the HuffPost and pitching their story ideas to experts in a ‘Dragon’s Den’ style panel.

The first task set for students was titled ‘Blitzing the B Word’ which asked learners to come up with inventive and accessible new ways of covering one of the leading news stories of modern times – Brexit.

Dr Sarah Jones said: “This exciting partnership is the result of a lot of work and discussion between the School of Media and the HuffPost and it is fantastic that we are able to officially launch the Centre today.

“We loved the idea around HuffPost basing themselves in Birmingham for a week as it was a real chance to change the media narrative from being London-centric, and one which our students really engaged with.”

Jess Brammar, Executive Editor, HuffPost UK, said: “We are thrilled to be partnering with Birmingham City University and officially opening the HuffPost Centre for Journalism. At HuffPost, we are focused on quality journalism that reflects what really matters to people. Having an opportunity to help inspire future generations of journalists is something I am incredibly excited about.”