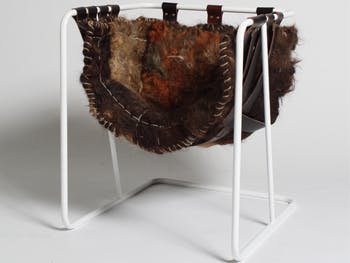 A Birmingham student has transformed hair to the throne after developing new designer seating out of waste cuttings of human hair.

Birmingham City University Product Design student Alice Evans has produced the unusual furniture from clippings of hair taken from four second city salons, after being inspired by the teachings of Buddhism.

The chair features hair cuttings from dozens of individuals, which have been treated with soap and water and stitched together with plant twines to create a special material used for the seating.

Alice got the idea after becoming interested in Buddhism four years ago. She saw a clash between the teachings and her work in product design, noting a ‘spiritual void at the heart of modern consumer culture,’ and decided to focus on creating a product, which fused design with waste reduction.

Her creation is aimed at making people think more about sustainability and wastage, as well as challenging perceptions around which materials can be used for design.

She said the public reaction had been mixed with some people initially being ‘horrified’ and ‘freaked out’ but added that many others had been open-minded and keen to touch the furry furniture.

The plant twines are essential to keep the fusion together, which Alice believes is important in symbolising the connection between humans and the rest of the natural world.

Alice Evans said: “The idea came from my dissertation in which I wrote about where Buddhist values can enhance the design industry and help in creating a more sustainable future.

I think using hair to create this chair challenges concepts about what should be used and highlights our social conditioning of what is acceptable.
Alice Evans

“Why is it ok to walk around with cow’s skin on our shoes or jackets, yet something made directly from us is seen as disgusting?

“Huge numbers of people own leather sofas, but the reaction to a chair made of human hair has been wildly different. And I really want to ask, ‘why’?”

Alice collected hair from across four different hair salons Toni and Guy, Bad Apple, Francesco Group Academy and Regis, before treating them with the soap and water mix to bind them together to make her unique material.

She was given bags of hair, which were due to be thrown away before working in her home to transform them into a new product to create the chair.

Speaking about the influence of Buddhist thought on her creation, Alice said: “I first became interested in Buddhist teachings about four years ago and most recently I’ve been feeling the benefits of being more mindful and embracing the ethical values. It has helped me see the world in a completely different light.

“I struggled with the religion teaching me that we don’t need more stuff to be happy and that I really believed as I felt such peace of mind once I let go of the grips of buying more stuff just for the sake of it and started to think about what was really necessary.

“This was contrasted heavily against my degree in which I felt product design was at the heart of feeding consumer greed by creating enticing things.

“From researching the two areas I came to the conclusion that they could work together – Buddhism transforms the spirit, you could say the mind, body and soul. While design aims to transform the world from a physical point of view. They are both trying to achieve the same goal to alleviate suffering.”

The chair was first produced as part of Alice’s end-of-year project and was out on display at Birmingham City University’s Inspired Festival, which showcases the work of students studying on courses in its Arts, Design and Media Faculty.

Alice plans to go on to work within the sustainable design industry and continue to experiment and encourage alternative ways of creating products.

People can find out more about Birmingham City University’s Product Design course at the University’s Open Day on Saturday 29 June.