Go-fast “dimples” may be the secret to running success 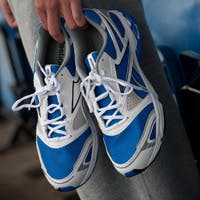 You may not be able to beat the world’s fastest man, Usain Bolt – but research led by Birmingham City University has revealed that a more aerodynamic running shoe could give an athlete a competitive advantage.

In the run-up to London’s 2012 Olympic Games, research revealed by a sports science expert at Birmingham City University has highlighted how the design of running shoes could boost an athlete’s performance.

Alongside colleagues from other Midlands universities, Professor Robert Ashford, Director of Postgraduate Research Degrees at Birmingham City University’s Faculty of Health, and his team have examined the drag on models of middle to long distance running shoes by running a series of wind tunnel tests.

The ground-breaking work has been published in the International Journal of Sports Science and Engineering and highlighted in a special Research Councils UK report entitled: ‘Supporting a UK Success Story’.

Shoes tested by Professor Ashford’s team were a Nike Zoom, Nike Free, Nike 100km and a Reebok DMXRIDE. The researchers concluded that the aerodynamics of a running shoe, both in terms of upper shoe design and the overall composition of the frontal aspects of the shoe, could potentially affect a runner’s performance.

According to Professor Ashford shoes that simulate the texture of a golf ball - eg featuring “dimples” - did well in the tests and proved to support better aerodynamic performance.

“If looking at differences in wind conditions, these small differences over a long period of time may actually affect energy consumption and ultimately the finishing time for an individual athlete – whether they are a professional or an amateur,” said Professor Ashford.

Sixteen-year-old Ellis Sabin, an up-and-coming middle distance runner with West Midlands based Tipton Harriers, helped to put the researchers’ theories to the test on the running track. See the full story on a Birmingham City University news video below.

The team set four different wind speeds to observe and measure how the shoes reacted to certain speeds in terms of their drag properties. The research revealed that the drag on the shoes varied.

Until now, say the research authors, the sports shoe industry has focused much more on the aesthetic appeal of running shoes rather than their aerodynamic qualities. With manufacturers expressing strong interest in the research, Professor Ashford expects the design of running shoes to change accordingly in time for the next Olympic Games.

Professor Ashford added: “Very little research to date has been done on the material of running shoes and there is great potential here for the future.”